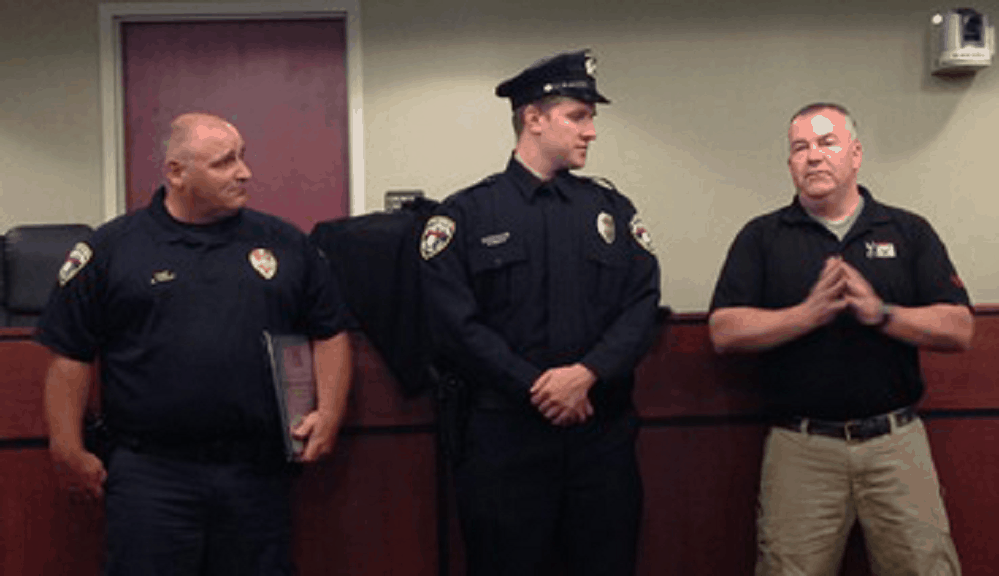 When he was struck right in the center of his chest by an AK-47 round, officer Ben Praster had no idea. He was just sitting at the desk doing some paperwork.

The 32-year-old officer with the New York Police Department was trying to figure out why his computer screen exploded all of a sudden, and sent shards of glass into his face. Praster said the threat was over before he even had a chance to react. He said his ballistic vest saved his life because the bullet actually bounced off of it.

Even better, there were no bruises on his chest.

Praster said there could have been all kinds of ways the situation would be worse. He said an inch or two to the right or left could have led to a different conclusion… including his death.

Wes Kahley, New York City police chief, said Praster along with fellow Officers Corey Ames and Chuck Crumpton were at their outpost located in the 700 block of East King Street on April 3. They were taking care of some paperwork after they arrested a teen on drug charges.

How Did The Bullet Travel?

Kahley said, around 9:15 p.m., a 7.62 x 39 slug (an AK-47 round) ripped through the window skill and pierced Praster’s computer and blew the screen out. Praster had minor injuries – cuts on his face, but survived the shooting because the slog lost a bit of momentum and velocity when it went through the sill and computer.

Kahley said the slowdown in momentum is the reason Praster wasn’t seriously hurt or killed. He said even the best ballistic vest can’t protect officers totally from a close-range AK round.

Praster said the first 20 seconds were sheer pandemonium, with them trying to figure out what had just happened. Once they realized they were being fired upon, the three officers took cover until they were sure everything was all clear.

Kahley said the bullet was the result of a drive-by shooting that occurred about a block away – the first block of South Sherman Street.

20-year-old Peater Grau-Lopez was shot in his left arm while he sat in a vehicle. Kahley said the shooter shot off several rounds into the vehicle from another one. Both Grau-Lopez and Praster were seen by a York Hospital for their injuries.

Praster said he wasn’t aware that his vest had been hit by a bullet and that it was fired from the dangerous weapon. He was shaken up by the incident, and said, his girlfriend yelled at him. Praster said he was extremely lucky.

Ed Hinchey is a body-armor technical specialist for Safariland Group, and according to the group, the close call Praster had makes him the 1,916th officer to be added to the Safariland Saves Club. Hinchey praised Praster and gave him a special “saves club” coin, a travel mug, shirt and other things during a recent ceremony that took place in York City Council Chambers.

Hinchey said this is the best part of what they do. He told Praster he understands what he and his co-workers and other law enforcement officers do on a daily basis. Hinchey said he was glad to put Praster’s name on the “saves club” plague and not the memorial wall for U.S. law enforcement.

Praster said the ceremony felt a little backwards, because praise should have gone to the Safariland Group. A graduate of Penn State with a Bachelor’s degree in English, Praster said he wasn’t made for a desk job. At the age of 28, he signed up for the policy academy… and he’s never regret his decision.

Kahley said the last time a New York City police officer had been shot was a decade ago. Scott Wertz shot at now-detective Bart Seelig, during a standoff in his Salem Avenue home. Wertz was high on ecstasy, and shot at Seelig when the officer attempted to open his bedroom window. The slug hit the ballistic shield. Wertz was sentenced to up to 28 years in prison.

Kahley said the ceremony was special because it’s something they’re luckily not having to do every day. Police are in the process of identifying the shooter that wounded both Grau-Lopez and Praster.