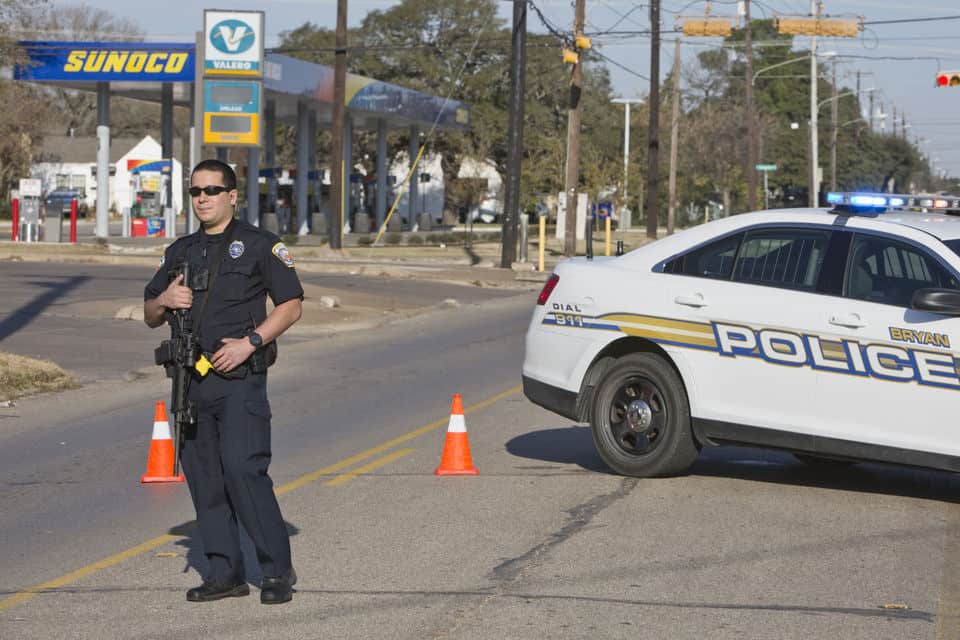 Rafael Antione Ginn, 31, a convicted felon who resides in Bryan, was found hiding in a nearby car soon after the crime. With guns drawn by multiple police officers, Ginn removed his shoes and tried running away, according to authorities on the scene.

A number of robbers – police would not say how many – robbed the Stripes convenience store located at 2000 S. College Avenue, Thursday at 1:17 a.m. The shooter was one of several robbers who got away with an undisclosed amount of money from the store. According to authorities, the robbers wore dark clothing, masks and gloves when they came into the store, with one holding a gun he showed the clerk.

Bryan police arrived on the scene of the robbery within two minutes. All morning long officers roamed the streets in the area looking for the other robber or robbers. Nearly 40 minutes after the robbery call, an officer at College Avenue and Duncan Street, which is near the store, tried to confront a man he thought was suspicious. While trying to make contact, the officer was shot. Fortunately the bullet struck his bulletproof vest, said Sgt. Ryan Bona, speaking on behalf of the Bryan department.

The officer’s name was not immediately released due to privacy reasons. Andrew Nelson, the Mayor of Bryan, said he’d spoken to the police officer. “Without him putting on that bulletproof vest, we would be telling a very different story today,” he said. “…he’s a little sore, but he has been saved by bulletproof vest and will be okay.”

Ginn is the only one under arrest so far in connection with the Stripes robbery, however by late Thursday he had not been charged with shooting the officer. He has been charged with: a felon unlawfully in possession of a firearm, aggravated robbery, evading and resisting arrest, and trying to take a police officer’s weapon. As of late Thursday, bail hadn’t been set.

Ginn has a criminal record that dates back to 2003 in Brazos County. Over the years, Ginn has been charged with crimes relating to marijuana possession, theft, and failure to identify himself to police. He also has a number of parole violations. In 2009 he was sentenced to 7 years in prison for burglary, and in 2013 he got a 2-year sentence after being convicted of family violence, according to court files.

Barking dogs alerted police officers to a Chevrolet Tahoe parked near the robbery. Officers investigated and found a man in the backseat that fit the robbers’ description. Although it was cool outside, the man was sweating profusely, which aroused suspicion.

Since a fellow officer had just been shot, an officer pulled his weapon, ordering Ginn to show his hands, according to Bona’s press release. Ginn refused and instead pulled his gloves and shoes off, then escaped out the rear passenger door with officers in pursuit. Officers quickly caught up to him, Bona said.

According to the police report, while Ginn was on the ground, he fought with the officer and tried to grab his patrol rifle, which was slung over the officer’s shoulder. Officers with Brazos County Sheriff’s Department, College Station and constables responded to help out and some ended up staying up to 10 hours, while they spoke to the residents and continued searching the area.

Linda Torres, her husband and son live behind Stripes and she was up and awake at the time of the robbery and shooting, but she claims she didn’t hear a thing. Thursday morning she asked an officer on the scene what happened and was told, “they were looking for someone who had robbed Stripes,” she said. “The officer asked if our shed was unlocked. I said that nobody had opened or gone into our shed. I unlocked it so he could have a look. In my opinion the police should have searched every house in the area,” she added.

Bona emphasized that police would have alerted the residents in the area had they thought anyone was in real danger. “There’s going to be some danger when you’re searching for an armed suspect. But if we really thought the public was in danger, there would have been a lockdown. But if there is no real or imminent threat, we don’t want to ‘cry wolf’ or create a panic situation.”

Recycle Your Out of Service Vest