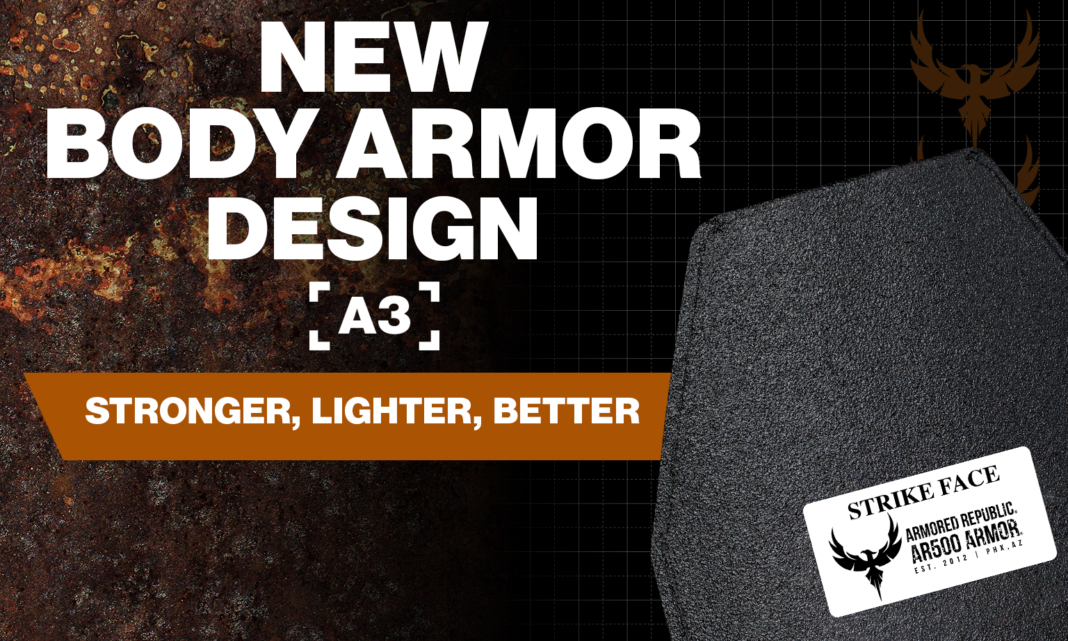 In 2011, the thought of using steel as body armor was a novel concept. It had been attempted by the military in the early 90s, however, there was a dangerous byproduct in the form of bullet fragmentation. This is when a high-velocity projectile smashes into a harder stationary surface. The result of this mating of velocity and metallurgy meant that small pieces of the projectile could find their way into your neck, arms, and other areas of your body – even though the threat was stopped on the surface of the plate.

Since its inception 10 years ago, Armored Republic has established itself as a force of innovation in the body armor world: It solved this fragmentation problem with a special coating that has since been applied to all kinds of hard armor – now optimized as our proprietary FragLock™ – which captures fragmentation so that steel remains the most effective and economic option for multi-hit stopping power. Today, its thinness, durability and low price equip freemen throughout the United States to protect themselves from rifle-rated threats.

But there’s still another problem to be solved: Weight.

Higher weights obviously make armor harder to carry- but long hours with high amounts of physical activity make this fact much more important than it first may appear. So the weight difference between types of body armor is a crucial factor to many.

As laid out in Armored Republic’s Body Armor Matrix, there are four material types used to make body armor: Soft, polyethylene, alloy, and ceramic. Across the three main materials used for rifle-rated armor- steel, ceramic, and polyethylene- steel is the heaviest. Ceramic is slightly lighter than steel, and polyethylene is significantly lighter than both. The drawbacks of ceramic and polyethylene, though, are that they are not as durable and strong as steel (both for stopping power and in general) and are more expensive (especially polyethylene). All armor innovators must answer this question: How do you best balance stopping power, price, and mobility?

With that question in mind, Armored Republic created the next step in body armor innovation to give steel’s high strength and economic price more of polyethylene’s low weight.

That manifests itself in the A3 (Alloy 3) plate, crafted with a patent-pending composite design that joins a single plate of steel, fixed in front as the strike face, with a polyethylene backer to catch the round.

Polyethylene, due to it being softer than steel, is not as capable at stopping rounds- it essentially absorbs them whereas steel decimates the round completely- and is vulnerable to significant backface deformation. Steel, meanwhile, is very resistant to backface deformation even with its much thinner profile.

When will the plate be available to the public?

Since development began for the A3, our Research & Development team has continued to modify the design to further optimize performance. Greater protection, thinner design and more have resulted from the tireless efforts of the Free Craftsmen in our R&D department. With that said, our newest body armor product will be available to the general public on August 2nd.

What are the main features of the plate?

Most fundamentally, the innovation of this plate comes in its composition: The never-before-seen combination of steel and polyethylene to create a powerful division of labor between the two materials. The benefits of that can be seen in its protective capabilities, weight, thickness, and price.

The A3 plate is classified as a Level III+ plate. This means it is capable of stopping many types of high-power rifle-rated rounds. It is in the lengthy process of NIJ certification and has passed all NIJ tests for 0101.06 Level III certification. Since the NIJ does NOT have a threat level III+ certification at this time, the III+ standings of the plate are independently and in-house tested. For clarity: Level III encompasses the ability to stop six rounds of 7.62x51MM M80 Ball and all lesser threats (including 7.62x39mm mild steel core), while threat Level III+ is capable of addressing both M193 Ball, and M855 Penetrator 5.56x45MM high-velocity threats.

The A3’s 4.6 pounds is a major milestone in the world of steel armor, with even ceramic being unable to compete with such low per-plate poundage. Note that most people wear body armor plates on the front and back, meaning even a four-pound decrease per plate becomes an eight-pound difference overall. This is a difference you can feel immediately- so much so that some of the people who handle the plate ask if it’s genuine armor.

Additionally, while polyethylene is notoriously thick- even requiring bigger carriers just to accommodate them- the A3’s thickness is merely 0.7 inches with FragLock™ coating.

The plate is available at a retail price of $399.

To join the front lines of protective innovation, join the Armored Republic today.