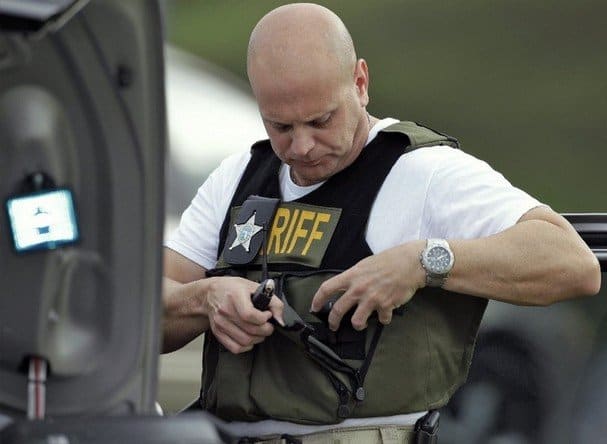 Ballistic Vests Do Not Stop Every Type of Round

Both the mayor and police chief of Selma have bemoaned the fact that their officers do not have the right equipment. Early Sunday morning a Selma police officer was fired on in an ambush and wounded. He is now at home recovering. But, Mayor Darrio Melton is using this incident to show why officers need better equipment, and that includes stronger protective vests.

According to Melton, Officer Micah Hale is on his way to a full recovery. Hale had just left a homicide scene in downtown Selma when he was ambushed and fired on by multiple gunmen, police said. The Alabama State Bureau of Investigation will keep working the case.

Melton described Hale as “one of the kindest officers on the force.” He said that when he visited him on Sunday at UAB Hospital he seemed cheerful and was optimistic about his recovery.

Chief Spencer Collier said, “Hale was shot right in the chest. Although he was wearing a Kevlar vest, it was still penetrated.” He went on to say, “There are so many rifles out there these days and our vests are not rated for rifle fire. Thankfully, Hale’s Kevlar vest did slow the bullet down.”

We decided to check with other law enforcement agencies in the area to find out what types of vests they use. The Mobile County Sheriff’s Office told us that they issue two types of bulletproof vests to their deputies. The one they wear on a daily basis is not fitted with a rifle plate. The other one is a heavy-duty vest that does have a rifle plate.

Sheriff Sam Cochran said, “If our officers are responding to an incident where someone is firing a high-powered rifle, they will put the heavy-duty vest on before arriving on the scene so they have maximum protection.”

In talking with Mobile Police, the vests they issue to officers are not equipped with rifle plates. Only the SWAT team has that level of ballistic protection. What happened to Officer Hale has left all law enforcement agencies in the area unsettled.

Earlier in the month, two dedicated Selma police investigators were sent out to the George Washington Homes public housing complex where gunmen fired off six to eight shots at them. Although their patrol car was hit, the two investigators avoided injury.

Selma Police Chief Spencer Collier called the gunmen cowards, but admits that his officers do not have the level of protection they need.

Cochran said, “So often on the news you see the level of violence that’s being perpetrated, which causes us to be even more cautious. It’s clear that the bad guys watch the news and see what’s going on with other bad guys, and they copy them. This is why we have to be prepared at all times.”

Correctional Officers are in Increasing Danger and Need Stab- and Slash-Resistant...

How An Oyster Could Lead To Improved Body Armor