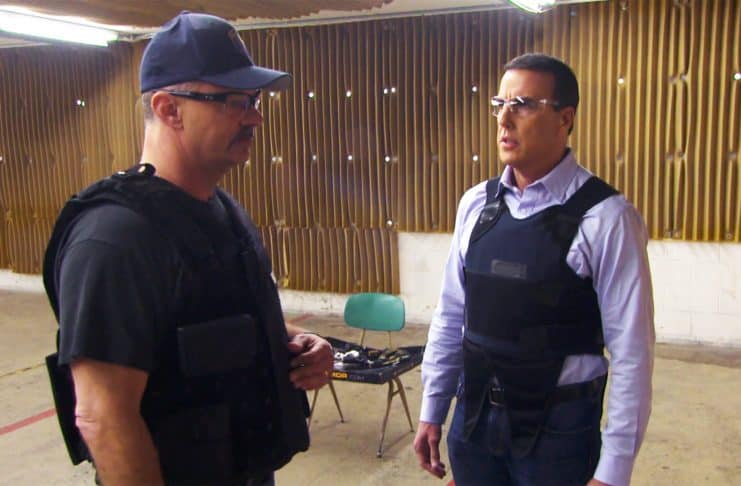 CBS publicity materials describe “Whistleblower” as taking “a thrilling look into the real-life David vs. Goliath stories of heroic people who put everything on the line in order to expose illegal and often dangerous wrongdoing when major corporations rip off U.S. taxpayers.”

“The CBS Whistleblower story demonstrates the courage and strength shown by Dr. Westick to face off against huge corporations to save lives,” said Kohn who has a long history of representing qui tam whistleblowers and has helped establish important whistleblower protections. The show is hosted by Alex Ferrer, a former judge and police officer. According to the CBS website, each episode “introduces cases in which ordinary people step up to do the extraordinary by risking their careers, their families and even their lives to ensure others are not harmed or killed by unchecked, unethical corporate greed.”

Dr. Westrick was the first official in the body armor industry to blow the whistle on bullet proof vests made from a material known as Zylon. His disclosures resulted in the decertification of Zylon vests by the National Institute for Justice and millions of dollars in sanctions obtained from Second Chance Body Armor (“SCBA”) and Toyobo, the Japanese company that manufactured the Zylon material. Dr. Westrick also testified in the wrongful death case of Officer Tony Zeppetella, who was shot while wearing a Zylon vest. Dr. Westrick’s testimony was the critical evidence that resulted in the jury awarding Zeppetella’s widow $1.5 million in damages based on the failure of SCBA and Toyobo to warn police officers of the dangers from Zylon.

In a ceremony marking National Whistleblower Appreciation Day, the Chairman of the Senate Judiciary Committee, Charles Grassley, pointed to the Westrick case stating, “when you don’t listen to whistleblowers like Dr. Westrick, that’s when the regrets come. Because of his remarkable courage, the product was pulled from the market, and no doubt countless lives saved. But think about it this: what if his company had listened to him in the first place? Times would have turned out very differently for the two brave officers whose vests failed them.”

“Dr. Westrick is a true American hero,” said Kohn. “He lost his job and career in the body armor industry by exposing Zylon safety risks.He provided documents and testimony justifying the removal of Zylon vests from the market, and compensation to states and the federal government due to the immoral sale of Zylon vests.” Westrick partnered with whistleblower attorneys Kohn, Kohn & Colapinto, LLP and the National Whistleblower Center to pursue his qui tam lawsuit to a successful end for the taxpayers and public safety.

“Toyobo’s 13-year legal battle took a major toll on Dr. Westrick and his entire family. His three children grew up under the financial stress caused by the termination and the emotional stress caused by the litigation, Kohn said. “The False Claims Act was enacted to protect and reward whistleblowers like Dr. Westrick, who sacrifice for the public interest, save taxpayers millions of dollars, and ensure that products sold to front-line responders are safe.”

Kohn, Kohn & Colapinto was honored by the National Law Journal as one of the top 50 plaintiff’s firms in the United States, and the only whistleblower lawyers selected. The firm successfully represented the UBS bank whistleblower Bradley Birkenfeld, who won the largest whistleblower reward ever to an individual — $104 million.