Bulletproof backpacks are flying off the shelves with sales rising nearly 300% following a series of school shootings as well as mass shootings in Dayton, Ohio and El Paso Texas. But unfortunately, there is not a single backpack on the market today that could have protected anyone from those rifle rounds.

Bulletproof backpacks and inserts are selling like crazy, both online and at major retail stores like Bed Bath & Beyond, Home Depot and Office Depot. These backpacks and bulletproof inserts come from brands like TuffyPacks, Guard Dog and Bullet Blocker with prices ranging from $99 to $490.

CEO Steve Naremore of TuffyPacks said, “It’s extremely disheartening that we have to consider making bulletproof backpacks for children, however we have no choice but to deal with the issue. Hopefully things will change, and this won’t be so much of a concern in the future.”

We make these backpacks bulletproof by inserting a back panel made of a ballistic fiber material. The manufacturer of this material claims that it has been independently tested and meets the exact standards as the National Institute of Justice (NIJ) Level IIIA body armor that law enforcement uses.

According to Department of Justice spokeswoman, Mollie Timmons, “The NIJ, which is the research, development and evaluation arm of the DOJ, does not test these inserts or backpacks and certainly does not certify them. Any company that markets these items claiming they have been NIJ tested or certified is making false claims.”

To stop the type of piercing rounds often fired by the type of military-style rifles used in recent school and mass shootings, would require something much stronger than a ballistic fiber material. You would need an insert made of a hard metal or ceramic plate weighing three or four pounds with a higher, Level IV rating.

Scott Reitz, a Los Angeles Police Department firearms instructor demonstrated this for NBC News L.A. in an effort to show parents and students the efficacy of these bulletproof backpacks.

At a firing range he mounted a Guard Dog Security ProShield II, which is a bulletproof backpack with a Level IIIA rating, to a mannequin torso wearing a t-shirt.

Using both a 9 mm pistol and a .45-caliber handgun, Reitz aimed at the backpack and fired. Both shots pierced the exterior and interior fabric of the backpack but could not penetrate the back panel armor.

Then with an AR-15 rifle, the civilian version of the M16 used by the U.S. military, Reitz fired off two shots. This was the same weapon that the gunmen used in several recent mass shootings. Both shots totally went through the back panel, exiting out the back of the mannequin.

It’s a matter of simple physics.

Professor Peter Diaczuk, who teaches forensics at John Jay College of Criminal Justice said, “Rifle rounds present a greater threat level than ammunition fired from handguns or even shotguns. This is the result of the rifle bullet’s higher velocity and therefore greater kinetic energy.”

Skyline USA produces Guard Dog backpacks and company president Yasir Sheikh gave NBC News a statement that read, “When considering how to protect against rifle rounds, we realize that it would require a heavy, thick ceramic plate. This would be too heavy to carry around on a daily basis, especially in backpacks worn by children or young adults. Skyline USA’s backpacks have a Level IIIA rating, which is typically the same level that protects local law enforcement.”

Despite the fact that these bulletproof backpacks cannot protect against rifle rounds, Diaczuk and other experts do not recommend against using them.

“If I had a child attending school, and the ballistic panels weren’t too heavy, I would be in favor of providing the extra protection for my child,” Diaczuk said.

According to a Morning Consult Poll for NBC News, nearly 40% of adults in the U.S. say they’re very worried about a shooting occurring at their child’s school. And nearly half of American adults say they would definitely buy their child a bulletproof backpack.

John Drury bought his son, Peyton, a bulletproof insert backpack. They live 45 miles from Dayton, Ohio, which is where a gunman recently shot and killed nine people.

Peyton said, “I never thought in a million years that I would have to carry a bulletproof backpack just to be safe at school.”

Drury says the price he paid for the backpack is well worth his peace-of-mind.

He said, “When all is said and done, I want my son to be safe so he can come home from school every day.” 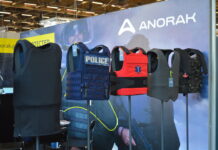