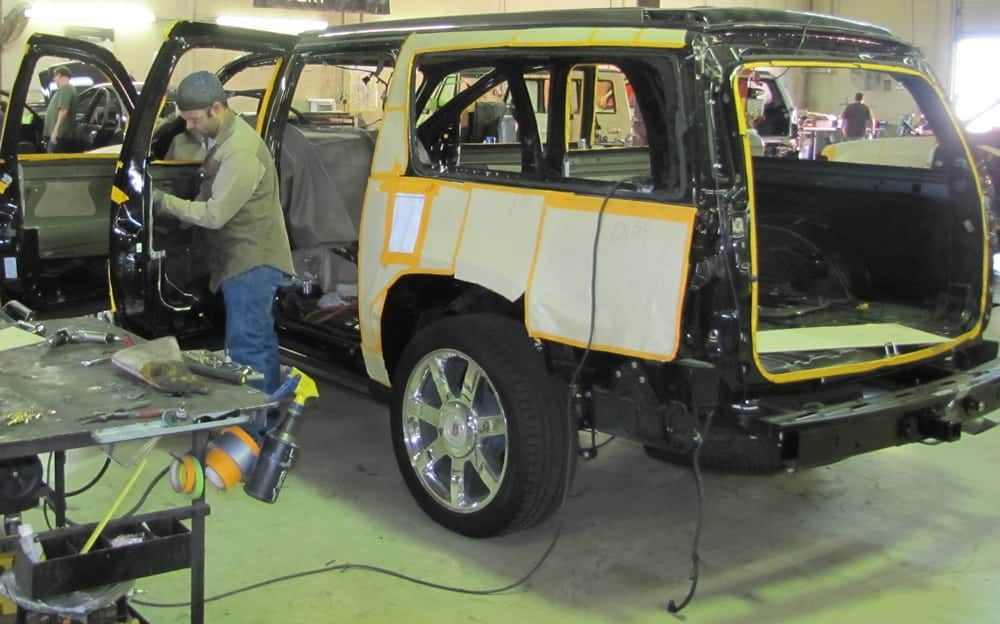 The armored car industry in Mexico has been good for years

catering to more than just the wealthy class. People who can afford it have been adding ballistic protection in varying levels to their cars. You will see small cars like VW Jettas being converted, as will as larger SUVs like Chevrolet Suburbans.

Local companies are doing the armoring work in most cases for cars being sold in Mexico. This is because there are so many different makes and models being converted into armored cars. Another reason is because European coachbuilders cannot meet the demand.

The Mexican Automotive Armor Association expects a 10% rise this year in the number of cars being converted and sold. This would bring the total number of armored cars in Mexico to 3,284. Record crime levels in Mexico are what’s driving this with 25,000 murders occurring in 2017 alone.

These numbers dwarf Brazil’s where the armored car market is booming, with sales of 15,145 in 2017. Brazil’s armored car industry is expecting an increase in demand of at least a 25% this year.

The local armoring industry has for many years been able to meet the demand in Mexico. However, Mexican automakers are taking notice and starting to localize their production of armored cars. Audi has a plant in Mexico that now assembles an armored Q5 SUV for the local market. And because there is such demand in Brazil, they are exporting their armored Q5 SUVs to Brazil as well.

Customers get a lower price since the armored Q5 sells for $87.000, whereas the aftermarket price would be $95,000. Another benefit is that Audi offers a factory warranty on all their cars, including armored cars. BMW, Jeep and Mercedes-Benz are now converting their vehicles to armored specs in their Mexican factories.

Wealthy people in Mexico and Brazil who opt to travel around in armored cars are worried about being kidnapped. They are not politicians who might be targets of an assassination attempt. These individuals are prime targets for a kidnapping or an armed robbery.

Therefore, the level of ballistic protection they would likely need is B5, which can withstand most handgun fire. This level of protection is lighter and less expensive than level B6/B7, which shields passengers from assault rifles and grenades.

Mexicans, who can afford an armored car usually select an average looking model to convert, like a Honda Crossover or VW. They do not want to attract attention by riding around in a large black SUV with tinted windows.

The B5 anti-kidnapping car package typically includes layered ballistic glass 3” to 5” thick, steel panels and run flat tires, which can withstand multiple punctures. If your armored car drives over steel spike strips, its run flat tires will not give way. This package also includes reinforced door handles, an armored gas tank, and a loud siren system. Some armored cars have tear gas canisters installed on their undercarriage that can be fired at attackers.

Those needing heavier VR7/VR9 levels of protection against grenades and military rifles can expect to spend at least $300,000. They can order these pricier vehicles from automakers or one of the few quality armorers/coachbuilders. The most reputable ones would be ASC, Carat Duchatelet, Friederichs and Trasco.

To avoid being targeted in the first place, some people choose to travel in older armored vehicles. These are cars that have been used by diplomats from various countries. They tend to be older Audi A8, Mercedes-Benz E-Class and Volvo S80 sedans in good used condition.

Jenson Button, a British racecar driver, barely escaped an attack by armed gunmen in 2010 in Sao Paulo, Brazil. The F1 champion was being driven from the Interlagos circuit in an armored Mercedes-Benz B-Class. His driver was forced to sideswipe other cars to get away. Gunmen in Brazil have attacked F1 crews from Williams, Sauber and Mercedes in the past few years, some in close succession.