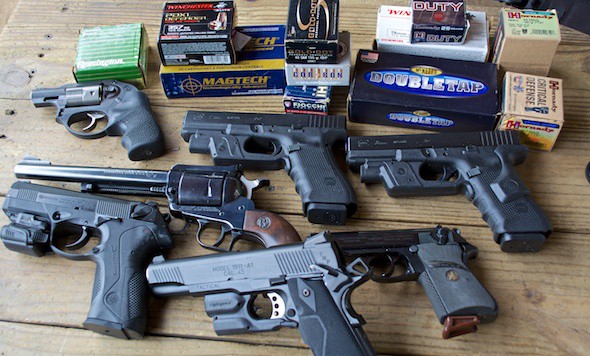 By Tom McHale – MyGunCulture
The Engarde folks sent us two sets of body armor. One to give away and the other to shoot to pieces. After all, we wouldn’t want to give our readers any untested gear, right? A quick look at EnGarde Body Armor
This specific model is similar to the Engarde Patrol. It’s an external setup with soft panels that are inserted into the carrier front and rear. The sides overlap so there is full coverage around the body. The carrier also features external pockets which are sized to house optional ceramic plates for protection against rifle and machine gun rounds. The soft panels included with the system are intended to stop pistol calibers only.

The material inside the panels is genuine Dyneema SB-21. While I didn’t count exactly, there are about 40 layers of Dyneema material in each ballistic soft panel. Each layer of Dyneema feels somewhat like a cross between wax paper and plastic tarp material. It’s got a slick and waxy feel to it with a “crinkly” texture. And it’s very, very lightweight.

This specific product is rated National Institute of Justice (NIJ) IIIa. The simple description of the NIJ IIIa rating is that it’s intended to stop most pistol rounds in calibers ranging from .32 through .44 Magnum. Previous certification definitions like NIJ II would not necessarily stop .357 Sig full metal jacket or hard jacketed .44 magnum rounds.

The vest we tested is rated for up to four straight-on, zero-degree angle hits per panel and two thirty-degree oblique hits. As I did not want to worry about deflected shots, I only tested zero-degree deflection scenarios, so perfect performance would be defined by four stops per panel.

Did it stop bullets?
Being me, I was a bit curious about two things. First, I wanted to verify the vest met manufacturer claims. Would it stop handgun projectiles in the rated bullet type and velocity parameters? Second, could I exceed those parameters and possibly make it break? And by “break” I mean at what point would a round be able to penetrate the vest?

During the vest destruction, I was careful to move shot placement around so that no two impacts were closer than three or four inches to each other.

So let’s take a closer look at results by ammunition type.

.32 ACP
Just for variety, I shot the vest with three different .32 ACP rounds with a Walther PP: Fiocchi 73 grain full metal jacket, Hornady 60 grain XTP and Cor-Bon 60 grain JHP. I thought perhaps the small diameter round nose of a .32 ACP FMJ might stand a better chance of sneaking through the vest undetected so to speak. The full metal jacket projectile flattened like a spoon, one hollow point somewhat self-destructed and the other flattened to about .125 inches top to bottom. If you’re covered head to toe in this material, and attacked by a horde of Walther PPK wielding evil dudes, you don’t have much to worry about, except bruises.

The full metal jacket projectile flattened like a spoon, one hollow point somewhat self-destructed and the other flattened to about .125 inches top to bottom. If you’re covered head to toe in this material, and attacked by a horde of Walther PPK wielding evil dudes, you don’t have much to worry about, except bruises.

9mm
Since I was feeling ornery, I decided to use 9mm ammunition that was designed to penetrate – Horandy’s Critical Duty. It’s a 135 grain 9mm load that is designed not to expand as easily as the standard Critical Defense load. It’s intended for law enforcement use where barriers like car doors and windshields might be encountered. And it travels at about 1,115 feet per second, so considering the heavier than average weight for 9mm, it’s moving right along. I’ve even tested this load against a giant pile of BS – The New York Times – and it performed superbly. To make sure velocity was up to par, I shot it from a Glock 17 Gen 4.

Again, no luck. And I noticed something really interesting that would appear a few shots later with the .357 Sig testing. All giddy with excitement and curiosity, I yanked one of my shots a bit off target, so it hit within ½ inch of the right hand side of the vest. I expected the projectile to take the path of least resistance and deflect away from the vest altogether. Contrary to my assumption, the round traveled inwards towards the center of the best and got tangled up in the Dyneema material. It’s almost as if the edge hit encountered more resistance than less.

.357 Sig
Keep in mind, by this point, the front panel had been shot 5 times, or one more than it’s rating. As the panels are shot, the Dyneema sheets start to separate as projectiles dump energy into the vest. As the layers separate, penetration is more likely.
Although I didn’t really plan to be unfair from the start, that’s kind of what happened. Shots six through eight, or double the vests rated capacity, were done with a smoking hot round – the .357 Sig. The projectiles are the same diameter as 9mm at .355 inches, but velocity is cranked way up. The two rounds I shot, Georgia Arms Gold Dot and Winchester PDX1 Defender both use 125 grain bonded projectiles at 1,400 and 1,350 feet per second, respectively. I used a Glock 31 with a 4 ½ inch barrel to get every possible bit of velocity advantage.

Shot six was the Georgia Arms Gold dot. It flattened completely into a nickel-sized blob of lead. Like the previous projectiles, it was stopped cold in the first ten layers of Dyneema material.

Next up were shots seven and eight, which exactly doubled rated capacity of the vest. These were both Winchester PDX1 Defender .357 Sig rounds. The seventh shot didn’t flatten, but tumbled and got caught up about half way through the vest panel – another complete stop.

The eight shot found how much punishment the vest could take, as it passed through and was immediately stopped by the back panel. At this point, having absorbed eight hits, the vest was done. It had blimped up to approximately eight inches thick as the panels expanded more and more with each subsequent hit.

As the rated standards call for up to four “straight on” hits, I would certainly say it did it’s job absorbing eight – three of which were from very hot .357 Sig rounds. Now let’s look at the back panel, where I tested the ”heavier” and larger caliber rounds.

.40 Smith & Wesson
I had no doubt the Engarde vest would stop a relatively slow 180 grain .40 S&W projectile, so I decided to try a lighter weight and higher velocity round – the Speer Gold Dot 155 grain bonded hollow point. I clocked this specific round at 1,168 feet per second from a Beretta PX4 Storm.

I’ll let you guess what happened. With the first hit on a fresh Engarde panel, I observed full “splat” with virtually no penetration into the vest.

.357 Magnum
Next up was .357 Magnum shot from a Ruger LCR. I used Hornady’s Critical Defense 125 grain FTX round. As expected, the second shot on the fresh back panel yielded the same result – a flattened bullet caught in the first several layers of material.

.45 ACP
Getting bored by all these stopped bullets, I decided to try a couple of different things. First, I had to try one of my favorite carry loads for my Springfield Armory TRP 1911 – Remington Golden Saber 185 grain +P. It’s a jacketed hollow point that I’ve choreographed at 1,167 feet per second from this particular pistol.

It penetrated exactly two of the 40 Dyneema layers before flattening completely. Yes, two.
So it was time to try a different option. I recently picked up a box of DoubleTap .45 ACP +P hard cast ammunition. It features a solid lead, semi-wadcutter projectile that’s designed for hunting thick-skinned critters like wild boar. Surely this would do something dramatic right? It was also the fourth shot at the back panel – the last shot within the performance rating of the vest.

Well, the 255 grain hard cast projectile did manage to penetrate a bit further. One layer. That one passed through two and stopped at the third, making a small tear in layer three. Only 37 more layers and it would have gone right through.

.44 Magnum
I know, there aren’t many .44 Magnums on the streets, so testing body armor against that isn’t really practical. But it did sound entertaining. So I dug out a box of Magtech 240 grain semi-jacketed soft point ammunition and launched one from a Ruger Super Blackhawk.

The result? Yet another deformed bullet, this one caught in the first four layers of the vest’s material. Add “magnum” to the mix and you get one more layer of penetration. Only 36 to go!

Closing Arguments
This was enlightening and a little bit shocking. After shooting each side of the vest, I cut it open to examine the results. As described earlier, the Dyneema material somewhat resembles wax paper. Heavier and stiffer, but not something you would think capable of stopping a bullet. Even though I understand the science behind it, it’s still mind-boggling when you feel how light the panels are.

This vest worked beyond what is advertised. I had to shoot the front panel to double the specification before it failed. The rear panel was shot five times – all with some insanely powerful handgun loads and never failed.

There was no deflection. All bullets were caught up in the material and stopped cold. Two shots hit on the very edge of the vest, yet were still trapped.

Watching the target stand and vest “jump” with each shot, I quickly decided I would prefer never to be shot, vest or not. While these have saved hundreds and maybe thousands of lives, getting hit with a supersonic projectile will still leave a mark. Ouch.
The model tested, identical to the one we’re giving away, is a great “emergency” option for civilian use. It slips over your head, outside of your clothing, and can be put on in seconds. Engarde makes lots of other models with some designed to be concealed, so check them out.