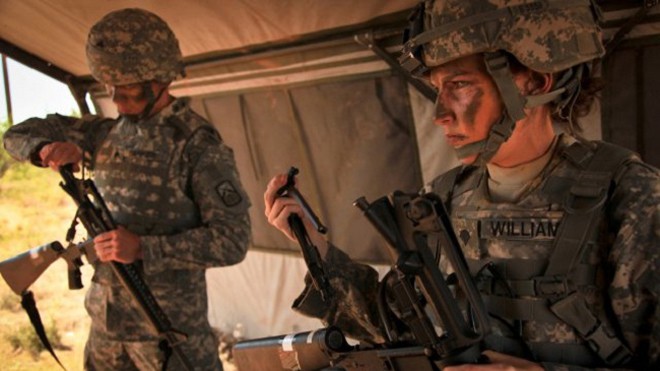 Female soldiers in the U.S. Army have spent years fighting on modern battlefields with body armour designed for men. But the Army plans to change that poor-fitting scenario by field-testing new female body armor starting next summer.

Male body armor poses problems well beyond fashion sense for the 14 percent of the Army that consists of female soldiers the male body armor’s broad shoulders restrict their arm movements and the front armor plate’s length cuts into leg circulation when they sit. That led the Army’s Program Executive Office (PEO) to begin making female body armor prototypes based on sizing and fitting tests.

“Most females tend to have a narrow or thinner waist as it relates to the chest area, so we pulled the waist area in,” said Lt. Col. Frank J. Lozano, the product manager for Soldier Protective Equipment.

“Some women will want more room in the waist area, so we allowed for adjustability in the cummerbund in the back, which can be pulled in tighter or let out more than on the standard Improved Outer Tactical Vest.”

‘Females tend to have a thinner waist as it relates to the chest area, so we pulled the waist area in.’

Bringing the shoulder area closer to the neck helped accommodate narrow female shoulders and opens the area around the armpits. That opens up the mobility for the shoulders and upper arms so that female soldiers can properly hold their weapons against the shoulder.

The female body armor also has a shorter bottom for a better fit, since the average torso length of women is shorter than that of men. That shorter length prevents the armor from chafing the hips female soldiers as they walk, and also avoids the blood circulation issue caused by the front armor plate.

A group of 30 female soldiers from the 101st Airborne Division will get 100 prototypes to try out in September or October. Their suggestions will then help finalize the body armor that deploys more broadly by next summer.

Better-fitting armor for female soldiers could also improve armor-fitting for all soldiers down the road. The Army has begun investigating how to make armor plating that better fits the human body — a process that could lead to science fiction visions of futuristic body armor fitted to both men and women.

“The challenge right now is that when you bring in those complex curvatures, the plate loses some of its strength,” Lozano said. “We’re working with some armor manufacturers to invest in a manufacturing capability that finds the right chemistry to develop the soft and hard armor necessary to have a complex curved plate at a light weight that still defeats the threats.”