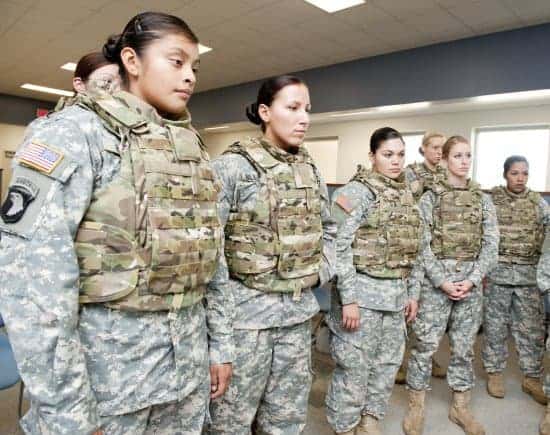 As more and more women join the infantry, the military has decided it would be best to redesign their gear to better suit the female gender. This includes changing their protective gear to accommodate long hair pulled pack into a bun.

In presentations made to the Pentagon’s Defense Advisory Committee on Women in the Services (DACOWITS), representatives from the Army and Marine Corps announced that both branches are redesigning their protective gear to ensure a proper and secure fit on women who have their hair in a bun.

According to the presentation, female soldiers have been offering their feedback, which has led to significant improvements in helmet design.

They expressed dissatisfaction with the how the X-Back configuration of the chinstrap holder does not accommodate their hair buns. The straps are in the wrong places so the helmet never fits their head very securely. As a result of this type of feedback, the Army is ready to introduce an H-Back configuration with an open space to provide room for a bun.

The presentation featured the H-Back solution as well as new and improved retention straps. The new straps are configured to provide women with better peripheral vision while keeping their earlobes from getting cut. Women in uniform are enthusiastically expressing their approval of these improvements.

Female soldiers have also been giving their feedback on the protective equipment they’ve been using and testing out new models as well. This is in effect, a human factors evaluation (HFE) process. As a result, the Army now has a new design for body armor specifically for women.

During the HFE process, new equipment and gear is compared side-by-side with the previous designs. This is called a “counter-balance test.” The personnel testing out the equipment take precise measurements of all participating soldiers to figure out each of their percentile rankings for the different body dimensions. This must be done carefully to accurately size and fit the equipment being tested.

The Army started this research project in 2010.

The Marines started to expand the range of sizes in its inventory of personal protective gear in 2016 when its infantry started accepting women. The goal now is to ensure that all female Marines in the 2nd percentile have gear that fits them while also ensuring that males in the 98th percentile also have properly fitting gear.

In the past, the protective gear was made to fit those who measured in the men’s 5th to 95th percentile in terms of size. These improvements will allow 8,856 Marines who are smaller in size and 5,711 Marines who are larger to have gear that actually fits. Marine Lt. Col. Chris Madeline, the program manager for the Marines presented this information to DACOWITS.

The Marine Corps will begin distributing the redesigned Enhanced Combat Helmet for women this spring. It will include the features discussed above that allow space for a hair bun.

According to the photos shown during the presentation, the Plate Carrier Generation III, which is now being developed, will be 25% lighter in weight and shorter than the previous generation. It will also be easier to adjust to better fit each individual.

The Marine Corps is also developing a pack frame that can be adjusted to fit better when wearing body armor. It will also cover a variety of sizes so everyone can have a better fitting pack frame.

For military women who have always had to deal with ill-fitting protective equipment and gear meant to fit only men, these changes are a big deal. Women’s protective gear left them with huge armholes as well as torsos that were way too long. Now they can look forward to not only space for their hair buns, but also vests that fit properly and offer much better protection.

Other branches of the military are also dealing with this problem. The Navy had a policy in place that governed how sailors were supposed to wear ball caps. Female sailors could not get a comfortable fit under these rules, which led to the Navy changing their policy last year.

At this point in time, the Army and Marines have chosen to broaden their range of sizes and enhance the fit of their members’ ballistic vests and plates instead of designing a complete range of protective gear just for female members.

Lt. Col. Kathy Brown, who was product manager at PEO Soldier for protective gear and equipment in 2017, conveyed to Military.com that studies show that women who wear the newer form-fitting ballistic plates find it difficult to get the fit right. This is why the Army abandoned that approach.

However, that reason is unsatisfactory to many.

“Military men would definitely be complaining if their branch of the service forced them to wear protective gear that had been designed for the female frame and figure,” said Carbajal, a former sergeant in the Marines. “It’s extremely important that the military provide female members with the same support and consideration that we offer male members. It simply does not line up with the values we are so quick to espouse.”