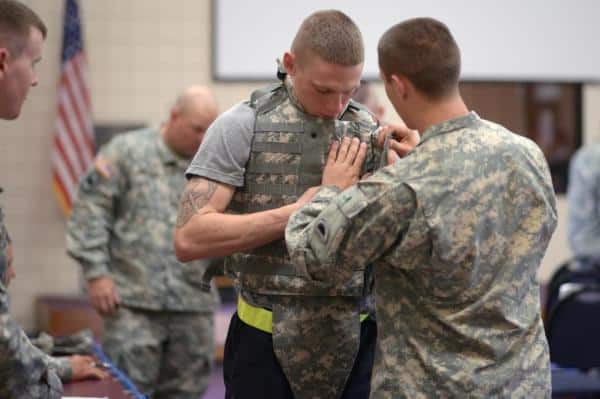 Body armor weight has been an issue for soldiers for decades, but as lawmakers and the military push to decrease the load, scientists, academics and the defense industry are developing technologies that create lighter vests, buoyant plates and more comfortable fabrics.

The Army has been working to develop the next-generation “soldier protection system,” which would equip troops with lighter body armor, along with upgraded equipment including health sensors and new protective eyewear.

“The most immediate need for body armor right now is weight reduction,” said Lt. Col. Kathy Brown, product manager for soldier protective equipment for the Army program executive office soldier. “There is a big emphasis on trying to lighten the soldiers’ load, and also to make sure that we have adequate protection and a great fit.”

The system also includes a modular, scalable head protection system that is 5 percent lighter than current headgear, and new ballistic protective eyewear that will benefit soldiers in varying light conditions.

An integrated sensor system that would measure heart rate, temperature and hydration levels, has not yet become a program of record and is still in the engineering and development phase, Brown said.

The soldier protection system is expected to provide troops with 10 percent overall weight reduction while maintaining or improving current ballistic capabilities, according to documents.
Lawmakers are pushing for the system to achieve a 20 percent reduction in weight, according to congressional reports.

“A goal of doubling the current SPS [soldier protection system] requirement (a 20 percent reduction in weight while maintaining or improving current ballistic capabilities) would ensure that soldiers have the most advanced hard armor possible to better address emerging and future threats,” the House Armed Services Committee report for the 2017 National Defense Authorization Act read.

Optimizing mobility and functionality while ensuring the soldier can still perform the mission is crucial, Brown said. The impetus for developing the female variant of the improved outer tactical vest, which includes eight new sizes, came from feedback received by PEO soldier, she said.

The soft armor vest, tactical vest, head protection system and ballistic combat eyewear projects are scheduled for full-rate production in fiscal year 2017, while the sensor system is expected to become a program of record in fiscal year 2018, Brown said.

But the solution isn’t merely to decrease the weight of one component of body armor. As the level and type of threat facing the warfighter has evolved, manufacturers like Honeywell have had to adjust their products to expand protection and counterbalance an increase in equipment needs, said Lori Wagner, special projects leader at the company.

“We’re covering more of the body now,” she said. “Before, you had the vest and the helmets, then you added the plates. Now, you’ve got the blast pelvic protector, groin protection, side protection and the neck.”

Honeywell produces Spectra shields made with its patented fiber technology, which can be up to 60 percent stronger than other body armor fibers, Wagner said. Spectra shields are used across the services in small arms protective inserts (SAPI), soft armor vests, helmets and shields, and the company is consistently working to make them lighter, she said.

“The Army just achieved a significant weight improvement where they got 15 percent [reduced weight] out of the vest components, and they just announced that they want another 20 percent reduction in weight,” she said. “It’s a constant far-reaching target for us, but over the years, we were able to show a marked improvement.”

Comfort and flexibility have become bigger priorities for body armor.

Engineers at the Naval Research Laboratory have developed a flexible, buoyant body armor prototype in a project funded by the rapid reaction technology office (RRTO), under the deputy assistant secretary of defense for emerging capability and prototyping. The office, which has overseen the project’s development for over a year, focuses on proof of principle prototypes and demonstrations of emerging technologies for joint applications, according to its deputy director, Marine Corps Lt. Col. Andrew Winthrop. It typically completes projects in less than two years, he said.

The prototype can take multiple hits and was shown in testing to provide equivalent protection with a 50-percent weight reduction over existing small arms protective insert designs, according to the RRTO.

The plate is made out of layers of industrial ceramic spheres that are encapsulated within closed foam in the body plates so they are better able to withstand multiple hits, Winthrop said. The technology, first developed at the Naval Research Laboratory, allows the armor to be more flexible than normal SAPI plates and neutrally buoyant, Winthrop said.

“We want to meet or exceed what we currently have, with more flexible options,” he said.
The prototype is meant to address several shortcomings in body armor design, including weight, mobility and ballistic resistance.

There are also safety concerns for maritime operations. Winthrop related a story about a number of Marines who drowned in Anbar province, Iraq, in 2006 — the sole survivor is alive because he was trained as a lifeguard and knew how to get rid of his heavy gear in the water.

Initial testing for the flexible buoyant body armor has shown promise. The National Institute of Justice standard defines ballistic resistance of body armor, and a Level 4 — the highest rating — indicates that the armor can withstand an armor-piercing bullet shot up to 2,880 feet per second. Current SAPI plates have a Level 4 rating, and the new plates have been shown to withstand multiple armor-piercing shots up to 3,000 feet per second in testing, Winthrop said.

“If you take a shot on the SAPI plates, you’re going to feel it,” Winthrop said.

Multi-shot testing was conducted at the Naval Surface Warfare Center in Dahlgren, Virginia, less than a year ago. Further refinement and testing is currently taking place at the Naval Postgraduate School in Monterey, California.

Work is also being done at Harvard University to produce a protective fiber that could deliver the same ballistic protection as current high-performance bulletproof materials, but would be significantly lighter and more comfortable.

Army Reserve Lt. Col. Kit Parker, a bioengineering professor at Harvard who has served multiple tours of duty in Afghanistan, is developing a next-generation nanofiber that can be used to design lighter-weight body armor.

Current body armor “doesn’t breathe. It’s pretty heavy,” he said. “If I could cut the weight in half, that’s an extraordinary thing.” When he was deployed, he was carrying over 100 pounds of armor and equipment, and suffered back issues due to the weight, he said.

“This war is a chronic condition, and we keep doing multiple tours, and eventually, bodies are going to start giving out,” he said. “You’re hoping it doesn’t give out on the battlefield, and then you hope it doesn’t give out before your grandchildren are born.”

Parker and his team in the Harvard Materials Research Science and Engineering Center are working to mitigate “the wear and tear” on soldiers’ bodies from carrying lots of protective gear and equipment. They have developed a technology similar to that of a cotton candy machine that spins raw Kevlar manufactured by DuPont, and other materials into softer, lighter nanofibers, he said.

The product could also be used to develop protective undergarment groin protection for soldiers, Parker said.

“Three hundred-plus soldiers have lost all or part of their genitalia because of” improvised explosive devices, he said. “Imagine spandex-type flexible shorts that have ballistic protection, or a lightweight Kevlar cup that a man could wear for protection.”

Parker’s team receives funding from a National Science Foundation grant to the Materials Research Science and Engineering Center. The team has yet to conduct ballistic testing for the nanofiber, and is currently looking for partners to commercialize the technology and develop prototypes.

Wagner has seen comfort become a bigger priority for the military as it works with Honeywell to outfit soldiers.

“They spend a lot of time in the evaluation of products and in the user experience before they will even accept a design,” she said.

Even further into the future, soldiers could be wearing customizable, tailor-made body armor, Wagner said. The military has discussed the idea of “complex suits of armor, where the soldier can determine what type of environment they will be in, and take the best components they need for that mission and still have a light, accessible armor system,” she said.

Lowering the weight of individual pieces of body armor while accounting for the weight of new and additional equipment remains a complex challenge for the industry to meet, she said.