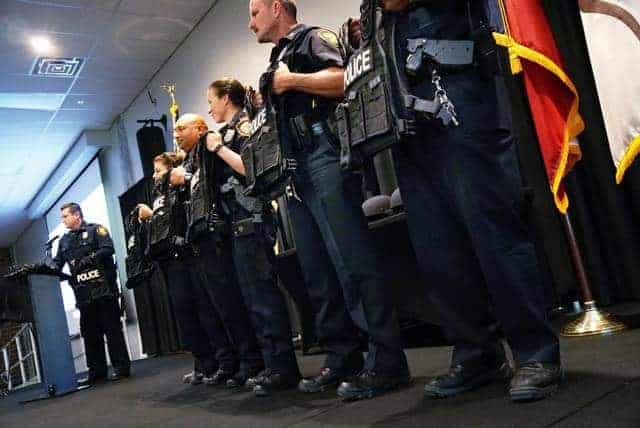 Fort Worth Police Department Gives Thanks To Supportive Community

It’s been a rather horrible year for law enforcement officers, in nearly every big city in America. And, Fort Worth is definitely no exception.

This holiday season, the law enforcement community is giving thanks for survival and continuous health of those who were wounded during the line of duty, including one officer who’s still recovering from the life-threatening injuries sustained on the job.

The community is more than thankful for the support it attained after the tragic shooting on July 7 in Dallas.

Michael and Valerie Mallick wanted to more than just give thanks to the men and women who put their lives on the line every day. They wanted to show the world why Fort Worth is the best American city and provided the city’s police force the biggest single private donation it’s ever gotten – $355,000.

The money is to be used to purchase advanced tactical armor to protect law enforcement, to ensure that their get to go home to their families every night and morning. The Mallicks’ generosity comes at the most crucial time, when the morale of Fort Worth’s officers needed uplifting and eases their family’s worries and minds.

Fort Worth is at a critical level for staff, as more officers are leaving the force before their retirement and many of them have chosen not to continue their service beyond retirement eligibility. Plus, recruiting new cadets has been extremely difficult to do.

This should concern all Fort Worth and Dallas area residents. The Mallicks said their contribution to the department should inspire other people to do the same thing. And, thanks to the leadership of two Fort Worth families, people can do this.

Mike Moncrief is the city’s former mayor, and along with his wife, Rosie, and another couple Gary and Marilyn Randle, established the non-profit initiative Protect the Fort, which was set up to raise money for the important equipment and training for law enforcement. The initiative hopes to raise $250,000 to purchase 900 bulletproof helmets.

This, other endeavors and community support will make law enforcement’s job much safer, especially if they’re faced with an active shooter situation.

Deadly gunshot wounds, like the one Matt Pearce sustained, are often in the stomach and the vests Mallicks have provided have saved thousands of lives of law enforcement all around the nation.

The tactical helmets Protect the Fort is providing will stop a majority of bullets. And, it’s the law enforcement community’s hope that the people of Fort Worth and surrounding areas will donate this holiday season to the initiative.

Fort Worth, Texas is unique American city thanks to the innovative leadership and great community that cherish all life… no matter who that life belongs to.