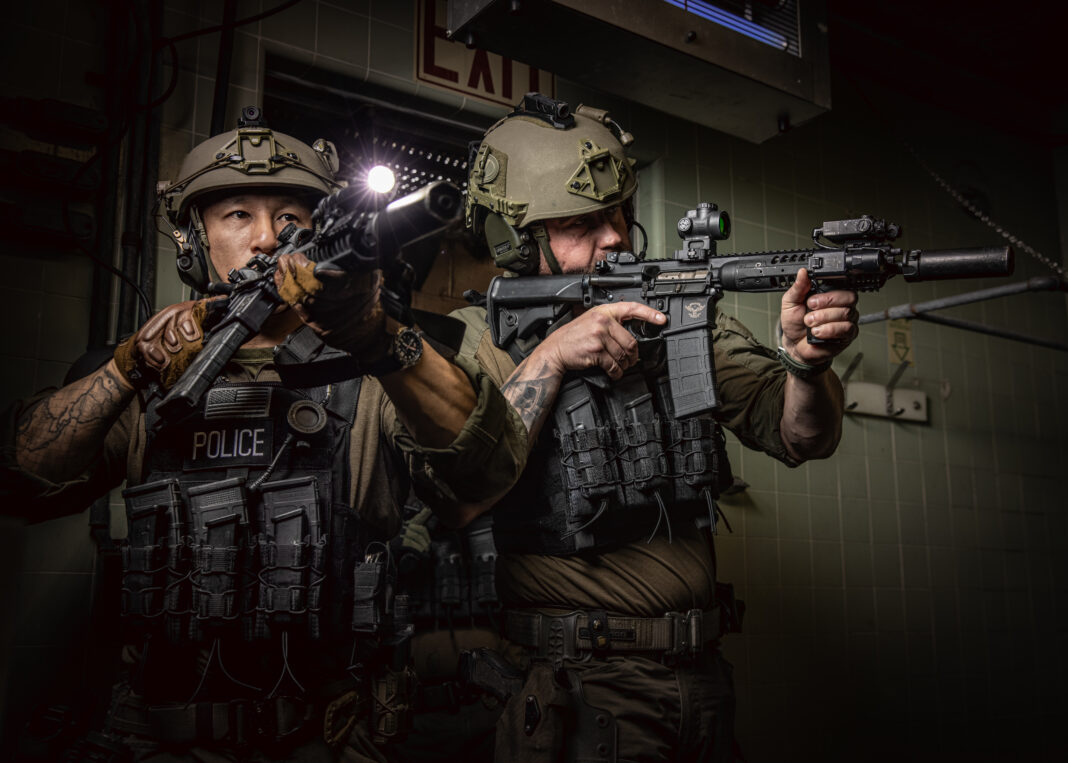 In the old days there was one type of body armor for all occasions and all threats. Even the primitive early models were effective against almost any pistol round fired from a distance of more than a few feet. Unfortunately, when it came to rifle rounds, results could vary a lot and variability is not a feature anyone wants in a bulletproof vest.

Today it’s much the same story when it comes to body armor and rifle rounds, though for somewhat different reasons. Weapons and ammunition have progressed a lot in the last 50 years and the threat matrix we face today is loaded with exotic bullet types, high-capacity firearms and supplemented by new threats like high-speed bomb and grenade fragments.

Sure, first responders can be armored against almost any threat, but there’s a tradeoff. Usually that trade involves balancing weight and cost. Body armor capable of withstanding hits from rifle rounds needs to have an outer plate composed of pressed UD, ceramic, metal or some composite material in addition to the soft armor panels usually carried in modern body armor. The hard inserts make the vest heavier and less flexible.

The weight of the extra inserts are why most law enforcement personnel prefer armor rated for handgun ammunition. Many wear a dual-purpose plate carrier that also has the pockets to carry the additional hard armor plates but don’t put them in unless they’re facing a rifle threat. Body armor manufacturers have responded to the variable threat reality.

“We offer Active Shooter Kits that contain a carrier with body armor in an easy to stow bag that can be easily tucked away in a locker, car, etc.,” says Damien Black, CMO of Spartan Armor Systems. “Rifle rated body armor is not typically something that the average person would wear out and about.”

The binary armor solution, where pistol armor is supplemented by hard armor plates on a situational basis, is not a perfect solution but making body armor heavier and stiffer makes it inconvenient and uncomfortable. On the other hand, in the modern world, law enforcement and military personnel have to be ready to respond to active shooter situations when the attackers are carrying military grade rifles.

One of the most common deadly weapons in the world is the AK-47 chambered for 7.62x39mm, also called 7.62 Russian. SKS and AK variants have been in production for decades by the Russians and Chinese with the number in existence estimated to be nearly 100 million. These rifles, and the pistol variants, are cheap, reliable and parts can be purchased or manufactured almost anywhere. AK-47s are available on the black market around the world and on the international arms market they can be purchased in bulk. The AK-47 and variants are used by military forces in 106 countries. With a minimum of care these weapons can remain serviceable almost indefinitely.

Even though the AK-47 and associated ammo are cheap, the reason they’re still in service is because they’re effective. 7.62mm Russian rounds will rip through the metal in cars like cardboard and soft armor panels are not rated for such powerful ammo.

Anyone in law enforcement or the military has to be ready, at a moment’s notice, to meet this deadly rifle threat. The job of rifle-capable body armor is to allow the wearer to take hits and remain in the fight. If an individual is only wearing a vest with soft armor panels, the wearer can still be injured by the bullet’s impact through what’s called back face deformation.

“Most rifle rated armor is designed to withstand multiple impacts,” says Black. “Steel core body armor can absorb numerous hits with little to no back face deformation. This means that the wearer is less likely to suffer secondary internal injuries from blunt force trauma. Soft armor and ceramic armor is much more susceptible to back face deformation (BFD), which under NIJ requirements the max BFD allowed is 44mm. This means that you may suffer anything from bruising to broken bones if the impact was to be severe enough.”

The Eco-friendly Twist of Body Armor Industry: Protecting You and the...