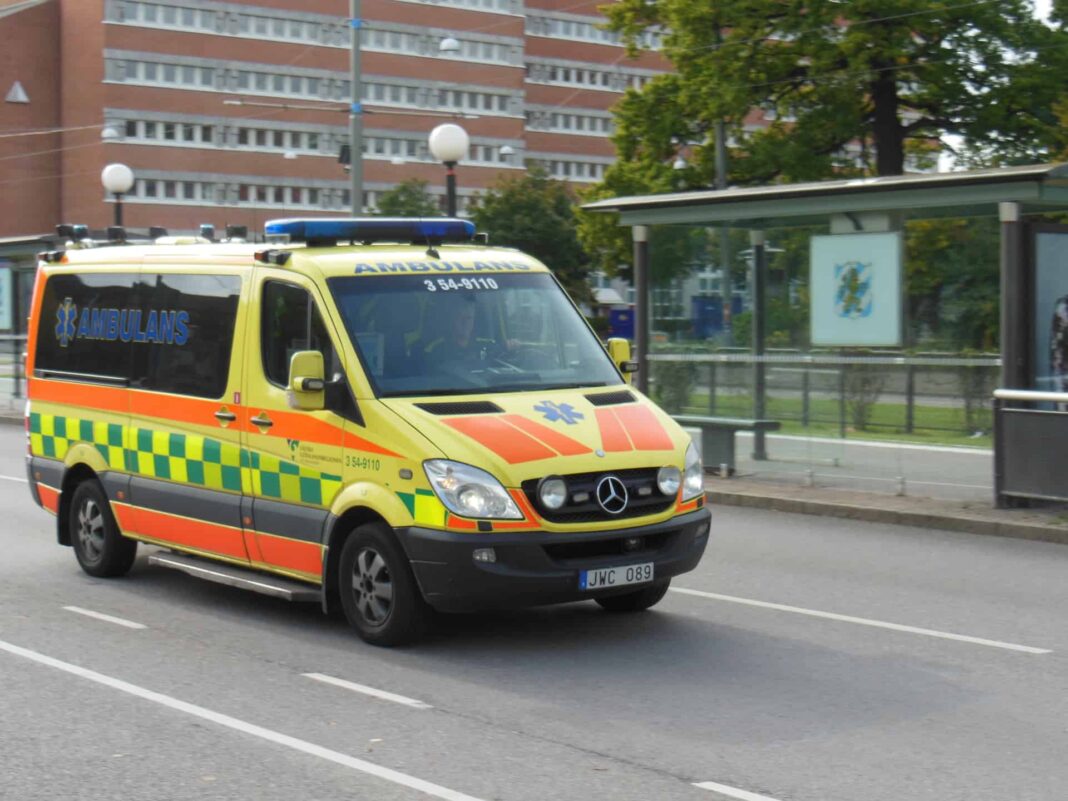 Sweden was once known for meatballs, midnight sun, Absolut, Volvo, blondes, and Ingmar Bergman. But added to that list may soon be paramedics decked out in military gear, including helmets, bulletproof vests, shin protectors, and gas masks. This is for protection in Muslim areas in which residents attack not only police, but also emergency medical personnel. Writes Speisa.com (edited for style and translation integrity):

They [the paramedics] are met with everything from guns to machetes…. “We are not protected anymore as we had been,” the head of Ambulansförbundet, Henrik Johansson, says to Dagens Medicin.

He explains that the Union wants the alarm center and ambulances to have access to the information police have on people who are likely to be violent or have weapons. But the union also wants to introduce what Johansson calls tactical units.

These are emergency medics who are ready to go into hot-spot areas, with riot helmets, bulletproof vests, shin guards and holster packs. They should have equipment adapted to work in such an environment. And of course also a gas mask, Johansson says.

So they will more or less look like the riot police?

These problems are particularly common in what have come to be called in Europe “no-go zones” — Muslim enclaves where authorities have lost control and violence is rampant. In fact, the Daily Caller recently reported that primarily Muslim immigrant gangs now control 55 areas in Sweden; this phenomenon is no longer just limited to big cities such as Stockholm, either, but affects 22 different municipalities.

The Daily Caller also provides more details on the violence, writing, “Thugs have slashed the tires of the ambulances, smashed their windshields and hurled large rocks from overpasses, while the paramedics themselves are subjected to both armed and unarmed physical violence on a regular basis.” This imperils patients as well, as paramedics now must often wait until the police have secured an area before answering an emergency call.

Buses, taxis, delivery companies, mailmen, and firemen are also targeted by the Muslims. Of particular note is that the criminals will purposely set fires and then attack firefighters when they arrive at the scene. This has resulted in cars being set alight almost every day in Muslim enclaves, and Sweden now, incredibly, has an average of one school fire every day — a world record. In contrast, reports the Daily Caller, Greece has only about five a year despite having virtually the same population as Sweden.

And authorities are thoroughly intimidated. The Daily Caller tells the story of two police officers in the no-go area of Landskrona who were cornered by approximately 50 Muslims. While they did draw their weapons and take a defensive posture, their superiors would not provide them backup for fear of “escalation.” The situation was only diffused because one police officer knew some locals who prevailed on the gang to “let the officers escape,” as the Daily Caller puts it. The site continues, “While such brazen aggression is rare, patrol cars are frequently pelted with rocks, and the drivers are targeted with green lasers. Blinding drivers with the powerful, hand-held lasers is a growing ‘sport,’ where the goal is to make the driver crash.

”Then there was the old man who was beaten in Tensta on October 17 because a gang thought he was with the police. Why? They mistook his hearing aid for a police earphone.

The Daily Caller additionally tells us:
Ethnic Swedes are also being attacked. Local celebrity Linda Edenström’s 12-year old son was savagely beaten. In October, he took the subway after school to give a birthday present to a girl in his class. He was unaware she lived in a no-go zone, and when he exited the station he was promptly stopped by seven grown immigrants. They declared that no whites were allowed and proceeded to attack him while hurling anti-white slurs.

Yet the Edenströms won’t have recourse to justice through Sweden’s infamous hate-crime laws. As the Daily Caller put it, “The law does not apply to an immigrant targeting a native Swede, even if an immigrant does so while explicitly stating they are doing it for racial reasons.” But it certainly applies when the roles are reversed. In fact, political correctness is so intense in Sweden that even just opposing immigration can mean pariah status. As journalist Ingrid Carlqvist put it, they will “point at you and say you are a racist; then you will have no job, no career, you might lose your family. You will have no future.” (For more, watch the CBN News segment “Soviet Sweden? Model Nation Sliding to Third World.”)

And Sweden already has achieved Third World status in one respect. It now has the highest rate of rape in Europe. Moreover, Swedish police recorded in 2010 the second-highest number of rapes in the world next to Lesotho — the small nation in southern Africa. This is mainly attributable to Muslim immigrants who target ethnic Swedes under the pretext that non-Muslims, and especially women in Western attire, are fair game.

Nonetheless, the Swedish government’s program to turn Sweden into a “multicultural” nation continues unabated. Whereas not long ago the country had 8 million people, it now has 10 million, with approximately 15 percent foreign-born. And that percentage increases every year.