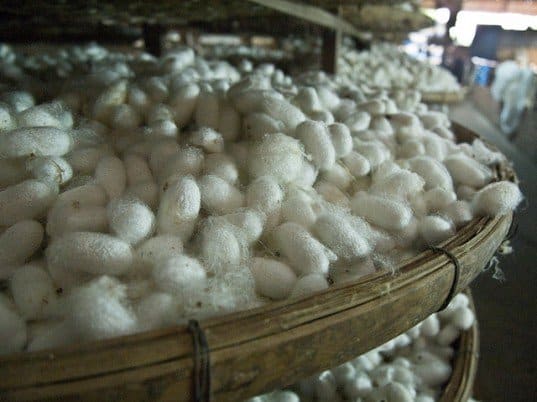 There’s a whole range of biomedical applications they, say, as well as possibilities such as bulletproof vests, sports clothing and automobile airbags.

“This research represents a significant breakthrough in the development of superior silk fibers for both medical and non-medical applications,” says Malcolm J Fraser, a Notre Dame University professor of biological sciences.

“The generation of silk fibers having the properties of spider silks has been one of the important goals in materials science.”

Like the ‘insectoid’ material recently revealed by Harvard University, the new silk could find a use in sutures, wound healing bandages or natural scaffolds for tendon and ligament repair or replacement.

Small quantities of similar materials have been produced before, but never in a way that could be commercially viable. The new discovery changes that, says Fraser.

“Several years ago, we discovered that the piggyBac transposon could be useful for genetic engineering of the silkworm, and the possibilities for using this commercial protein production platform began to become apparent,” he says.