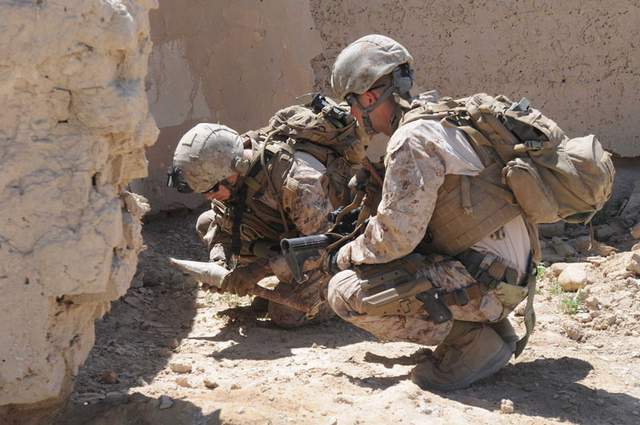 When it comes to body armor, the Marine Corps should be willing to accept more risk in exchange for cutting weight and improving the mobility and speed of those who wear it in combat, according to a top civilian official who oversees research and development of the service’s next-generation equipment.

“We have requirements that vests stop 7.62mm rounds at muzzle velocity,” Solhan said. “If somebody shoots me that close, I could gut him with a knife.”

Most shots fired on Marines are made from a considerable distance. Additionally, there is no need for flak vests to be able to stop multiple .30-caliber armor-piercing rifle rounds at close range, as requirements dictate, he said. Marines seldom need that much protection so requirements should put more emphasis on constraining weight.

“It is dumb to have a requirement to stop armor piercing ammunition at muzzle velocity, and for multiple hits, when the probability of encountering that is almost zero. The probability of working your ass off and becoming fatigued and injury-prone and totally angered by the amount of weight you carry is 100 percent,” Solhan told Marine Corps Times in an interview May 3.

Solhan’s no-nonsense comments jibe nicely with the theme for this year’s industry briefing by Marine Corps Systems Command and the Program Executive Officer of Land Systems: “Lighten the MAGTF,” or Marine air-ground task force. That includes efforts to cut weight from big trucks down to the personal protective equipment grunts carry into battle, officials said during the conference.

Strides already have been made to lighten the body armor Marines carry. In Iraq, where most operations were vehicle-mounted, commanders called for heavy vests, with side plates and collars, to protect troops from the shrapnel sprayed by improvised explosives. But in Afghanistan, a country with much less infrastructure than Iraq, Marines are more often than not on foot in searing heat, prompting calls for a streamlined flak vest.

In answer to those requests, MARCORSYSCOM developed and fielded first the Scalable Plate Carrier and now the improved USMC Plate Carrier. Thousands of the latter already are downrange. A minimalist piece of gear that holds protective plates, it provides less fragmentation protection overall, but is well suited for hot environments. That is highly desirable in environments where the primary threat is from small-arms fire, the Marine Corps’ former program manager for infantry combat equipment, Lt. Col. Kevin Reilly, told Marine Corps Times earlier this year.

Solhan’s office continues to study new fabrics and ceramic materials that will offer even lighter protection, but these materials have been pushed nearly to the limit, Solhan said. Defense industry researchers are looking at the prospects for “liquid body armor,” which uses shear thickening fluid to halt projectiles. These vests are flexible, but when hit with a high-velocity force the molecules compress almost instantly and transform into a semi-solid capable of stopping some rounds and fragmentation. However, Solhan highly doubts this emerging technology would be practical or defeat armor-piercing rounds.

“Today we have such a risk aversion to casualties that battalion commanders, company commanders, platoon leaders all feel it is way too heavy, but they don’t have the option to take this stuff off because they will get in trouble if somebody gets hurt,” he said. “How many casualties do you take because you are too fatigued or too slow, or you are like a turtle on its back? That is significant.

“A real warrior,” he said, “would like to go to combat with a weapon, a loin cloth and a light coat of oil.”
His point is this: Body armor should protect hands, elbows, knees, and vital body parts, but preserve mobility. The Marine Corps’ requirements need to reflect that, Solhan said — not ballistic capabilities alone.