Six Drug Task Force officers involved in a deadly April 12 shoot-out were wearing bullet-resistant vests, and two of them were critically injured by bullets that hit above the necklines of those vests, said Associate Attorney General Jane Young.

Most bullet-resistant vests have the same neckline, said Tim Sanborn of Rye, who has sold body armor for law enforcement and undergone ballistics training. The exceptions, Sanborn said, are tactical vests, which have throat protectors and are worn by members of Special Weapons and Tactics teams.

The DTF officers were at the 517 Post Road residence of Cullen Mutrie on April 12 with a warrant, as part of an investigation into the alleged sales of oxycodone, Young said. After Mutrie didn’t respond to initial attempts at contact by local police officers, the DTF officers “breached” Mutrie’s front door and were met with gunfire, the attorney general said.”Throat protectors and helmets are standard gear for SWAT teams,” he said. “But you wouldn’t think you’d need a tactical vest and helmet to serve a search warrant in Greenland, New Hampshire.”

Four DTF officers were shot in an initial series of gunshots, then Greenland Police Chief Michael Maloney was killed by a subsequent shot fired from a front basement window, Young said. Two of the four DTF officers — detective Scott Kukesh of the Newmarket Police Department and detective Jeremiah Murphy of the Rochester Police Department — were hospitalized in intensive care for several days before being released.

Young said Wednesday she didn’t know what kind of vests the DTF officers were wearing April 12 because her office hasn’t completed its investigation into Maloney’s death, the shootings of the four officers and the suspected murder-suicide of Mutrie and his alleged drug-dealing accomplice, Brittany Tibbetts.

“Until we’ve talked to everybody, I can’t answer that,” said Young, who confirmed the two seriously injured officers were shot in the areas above their vests and below their necks.

Sanborn said he demonstrated different types of body armor at the University of New Hampshire to 100 local law enforcement members. He said he has also worked with training and procurement officers representing most area police departments, including those that employ the DTF officers injured during the Greenland shoot-out.

UNH police tested SWAT gear for two months, and Portsmouth police tried prototype bullet-resistant vests with chest cups for female officers, he said. Most of the vests are customized to fit a specific officer and some have adjustable shoulder straps, Sanborn said.

Concealable vests, worn by most members of law enforcement, have the same necklines because the vests have a tendency to ride up when an officer sits down, Sanborn said. Large stomachs also cause the vests to rise, he said.

Sanborn said he marketed new vests made with a substitute for Kevlar to leaders of local police departments, including to the late Maloney. He said the Greenland chief was interested in the new technology, but didn’t have the money in his budget at the time and wasn’t eligible for a federal grant that pays half the costs for police departments to buy body armor every five years.

The attorney general’s office said Maloney died from a gunshot wound to the head. 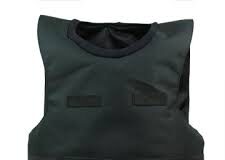 Simpsonville Man Found Guilty Of Being “Felon In Possession Of Body...