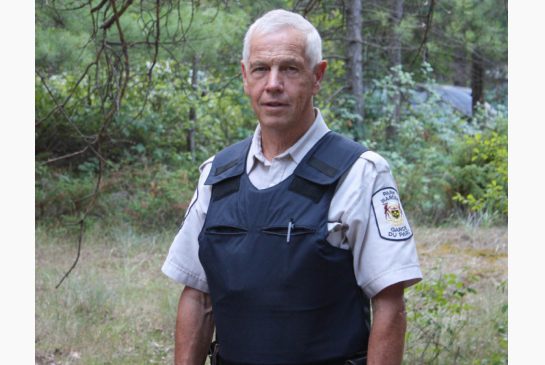 Nothing quite says “welcome to the park” like a smiling (we presume) official in a bullet proof vest.

That’s what will greet families in Ontario’s provincial parks this summer. The government has ordered park wardens to wear body armour while they patrol campsites making sure people aren’t littering or blasting the radio. Not surprisingly, none of our park wardens have been shot or knifed carrying out these duties. So why on earth are we now spending $225,000 to stuff 450 of them into bulletproof vests?“

Park users reflect society as a whole,” says a Ministry of Natural Resources spokesperson. “Body armour also provides protection against any blunt force such as punches, kicks and strikes with weapons, as well as reducing chest trauma sustained in motor vehicle accidents.”

Wow. With a tally of violence like that it’s a wonder that anyone feels safe enough to even pitch a tent in a provincial park. Are campers really that rough a crowd? Do they fly into a rage when they discover they’re missing a tent pole or they’ve burnt their s’mores?

We know Ontario is not Jellystone Park. Keeping visitors in line is more complicated than it was for Ranger Smith, who spent his days threatening to send Yogi Bear to the zoo if he didn’t stop stealing picnic baskets. But our parks aren’t a scene from some police action show, either.

On average, there are two to three physical assaults — usually fuelled by drunkenness — on wardens each year, the government says. These are generally punching and shoving, which body armour won’t do much for anyway. So, if there’s a case to be made for why this expensive new equipment is suddenly needed, let’s hear it. Nothing, so far, has been put forward to justify making park users feel like the danger lurking behind the trees is far greater than poison ivy.

If the government thinks body armour is needed because “we don’t want to take chances,” why not guns, too? Ontario’s conservation officers, who take on more serious enforcement duties, already have those. Where does that kind of thinking end?

This is little more than a mindless escalation towards police-style gear. A bullet proof vest simply isn’t needed for a job that generally involves ensuring park visitors have a good time and follow the rules.