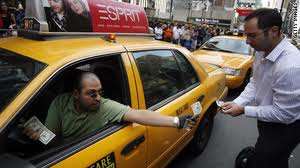 Livery-cab drivers are dressing for battle on the city’s meanest streets.

A dozen bulletproof vests were doled out yesterday to the New York State Federation of Taxi Drivers by Midtown-based Security USA in a bid to keep drivers safe.

The donated vests will be used by livery cabbies who work in the city’s highest-crime areas, including East New York in Brooklyn, the South Bronx and Jamaica, Queens, said the federation’s Sergio Rodriguez.

“We want to be able to leave work and go home to our families,” said East New York livery driver Rafael Peña, 51, who was once assaulted by knife- and gun-wielding thugs.

The body-armor giveaway was part of a program started in December by Security USA. Then, the company donated 15 vests to drivers. “We want to make the drivers feel a little more safe,” said David Boehm, the head of Security USA.

His firm hopes to continue to provide at least a dozen vests a year to the federation. According to Boehm, the vests can stop bullets from 9mm, .38 and .380 pistols and .357 magnums, as well as any knife.

The bulletproof vests will be kept at livery-car bases and shared among drivers, Rodriguez said. In addition to the chest protectors from the security firm, the livery group also has been given 15 to 20 vests from retired cops, Rodriguez said.

Pena, who came to New York from the Dominican Republic 35 years ago, works for ATV Car Service and says he was assaulted on Christmas Eve in 1988. He said three men got into his cab, and one held a 21-inch knife to his throat and then elbowed him in the face, knocking out his teeth.

One of the other men got out of the cab and put a 9mm gun to his head. Pena said he began to tussle with his attackers, who fled. They were never caught. “This is going to be a marvelous protection for us,” he said of the vests.

Security USA started the vest program in memory of livery driver Cesar Santos, who died in June 2010 after being shot in the stomach in a fight with two men who refused to pay their Bronx fare. In December, livery cabby Trevor Bell, 53, was shot in the head during a botched Queens robbery.

Although the vests offer no protection from a gunshot to the head, the federation’s Rodriguez said 95 percent of attacks on livery cabbies have involved knives to the lower back, or guns at the driver’s side. “You’re never going to be able to protect the drivers 100 percent,” he said. “The purpose is to minimize damage in the event that something happens.”