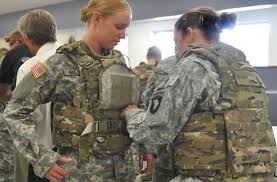 When U.S. soldiers go into combat, chances are they’re wearing at least 40 pounds of modern body armor — in addition to the weight of their weapon and ammunition. Typical protective gear worn by most American forces, says Body Armor News, “consists of a vest with a series of inserts that protect most of the upper body from armor-piercing rounds.”

Waist gunner wearing helmet and flak suit in action on a heavy bomber, circa 1944. Courtesy Metropolitan Museum of Art. That got us wondering about the flak jackets worn by World War II bomber crews to protect them from airborne shrapnel. Turns out, their protective gear was designed by the Air Force in collaboration with—wait for it—medieval armor specialists at New York’s Metropolitan Museum of Art. Who knew?

Global Security notes that then-Colonel Malcolm Grow, the surgeon for the Eighth Air Force, tallied the wounds received by his units, and determined that 70 percent were caused by low-velocity flak. He decided that light armor would offer the gunners adequate protection.

According to a 1945 article from The Metropolitan Museum of Art Bulletin (“Helmets and Modern Body Armor in Modern Warfare” by Stephen V. Grancsay), the Air Force consulted the museum’s armor workshop. “The design of Armor Vest M6, which is the latest standardized flyer’s armor, is based on one of the Museum’s brigandines dating from about 1400.” And that’s not all: “The suits of armor in the exhibition halls are constantly studied for suggestions,” wrote Grancsay, “and no type which seems to hold the slightest promise of adaptation is overlooked. Heavy armor for the military sport of jousting, lighter battle armor, shirts of mail, scale armor, and the quilted jackets of renaissance days have all been carefully examined from a new viewpoint.”

Austin Police Distributing 958 New Ballistic Vests to Officers on the...