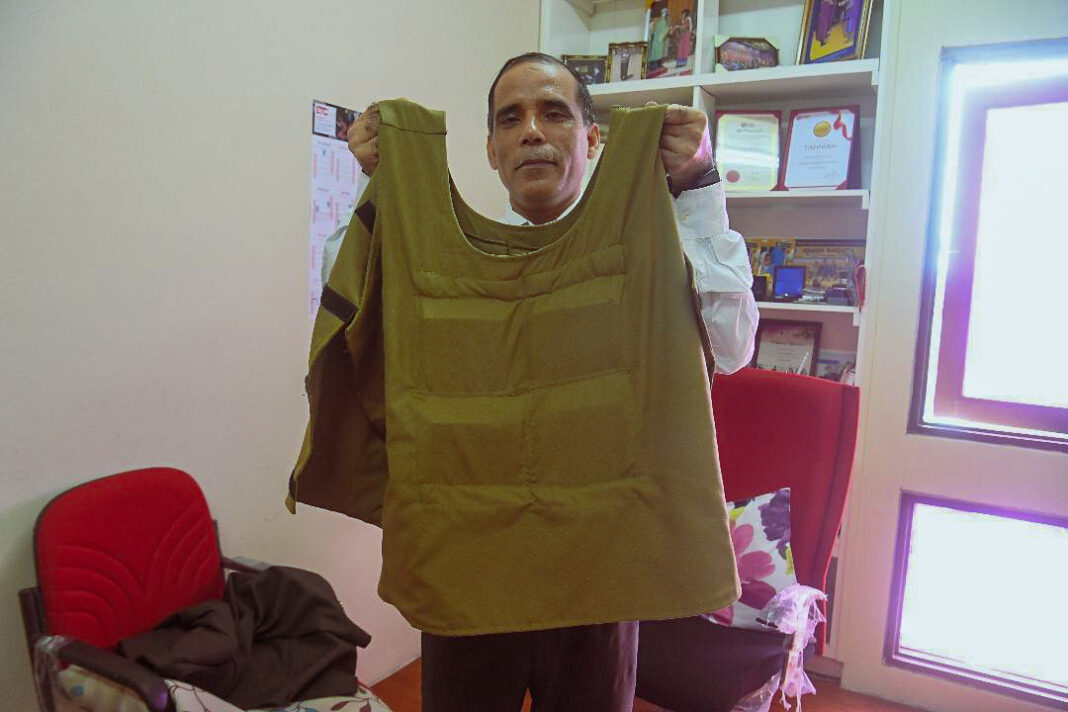 Researchers from Universiti Putra Malaysia (UPM) have successfully produced a bulletproof, multi-layered body armour piece. Using the skin layer of coconut sheath or cocos nucifera sheath, as a replacement for the Aramid fabric used for the classic bulletproof vest.

The innovation, named Techno-Economic Hard Body Armour, is placed in the jacket as a bulletproof vest. It meets the requirements of the National Institute of Justice (NIJ) level III ballistic standard.

A ballistic test was performed using a 7.62mm calibre bullet as a high kinetic energy projectile from 15m distance and fired at the velocity of 838±15m/s. The test was conducted at the Science & Technology Research Institute for Defence (STRIDE), Selangor.

The research group leader, Dr. Mohammad Jawaid, said the result showed that the depth of blunt trauma measurement of the CNS-based multi-layered bulletproof vest was at 26.51mm, which was relatively lower than the maximum allowable blunt trauma limit of 44mm according to the NIJ standard.

Dr Mohammad Jawaid, Senior Research Fellow (Professor) at Laboratory of Biocomposite Technology, Institute of Tropical Forestry and Forest Products (INTROP), UPM, said the vest could also save about 44% of the fabrication costs compared to Kevlar-based material.

He said that the composition of the material was generally made up of ceramics (SiC), composites (Kevlar /epoxy) and metals (Al). However, he said, a major impediment of using aramid fabrics-based composites or Kevlar as a second layer in the MA was its cost and environment pollution.

“Due to its non-biodegradable nature, it may pollute the environment and affect the eco-system, and because aramid fabrics are generally more expensive, the overall cost of manufacturing material is increased,” he said.

He added that a monolithic bullet proof vest made from aramid or steel fabrics required a large level of thickness, which could affect the movement and comfort of the wearer.

As such, he said, the research he was undertaking aimed to replace the aramid fabric/Kevlar with an eco-friendly and easily available natural material (cocos nucifera sheath/epoxy composite) without compromising its ballistic performance.

He said Techno-Economic Hard Body Armour was made using eight pieces of material; four pieces were placed in the front and another four were placed at the back of the jacket to make it a coconut bullet proof vest.

The weight of Techno-Economic Hard Body Armor is about 5 kg.