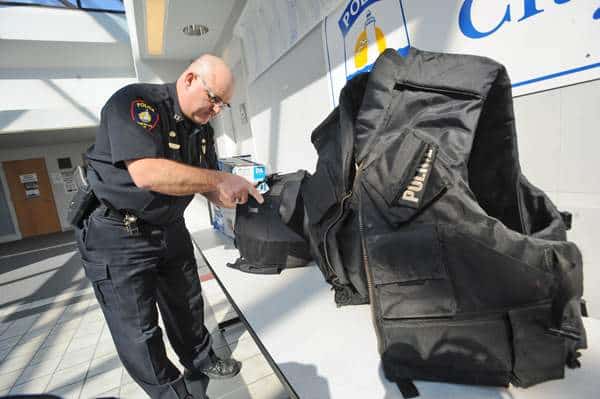 The nine-year veteran of the Fond du Lac Police Department was responding to an alleged sexual assault report at 24 S. Lincoln Ave. the morning of March 20 when he was shot in the chest and shoulder with a deer rifle wielded by James Cruckson.

According to Dr. Raymond Georgen, medical director of trauma at Theda Clark Medical Center in Neenah, although the bullets pierced Williams’ body armor, the vest helped slow the bullet and change the trajectory of the bullets, preventing a fatal injury.

Although fellow officer Craig Birkholz was also wearing a personal ballistic vest at the time, he died after Cruckson took aim from a second story window and shot the 28-year-old officer in the chest as he was exiting his squad in a nearby parking lot.

Citing the ongoing investigation, police aren’t confirming whether or not the vest Birkholz was wearing that morning was designed to stand up to the caliber of weapon used against him.

Almost all police departments responding to a 2009 U.S. Department of Justice survey reported that they issued body armor to officers. However, only 59 percent of those responding departments required officers to wear the vests.

“It’s an individual choice, but the majority of our officers do wear vests,” Lemke said. “If an officer does request a vest, then they are required to wear it.”

The level of protection provided by the vest is also at the discretion of each officer, Lemke said.

“There is a certain level of vest that we recommend, and some officers elect to receive a higher threat level vest, but it comes at a cost of comfort and mobility,” Lemke said.

Sgt. Brian Ausloos of the northeast region of the Wisconsin State Patrol said the agency’s policy does not mandate that troopers wear vests while on duty.