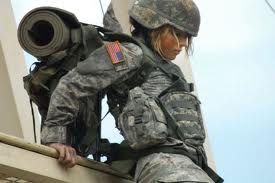 Cartoonist Bob Thaves once said, “Ginger Rogers did everything Fred Astaire did, except backwards and in high heels.”

This quote is applicable to the Army’s female Soldiers of today, who now make up 14 percent of the total force. These females are now closer to combat than ever, fulfilling essential roles both stateside and during deployment. However, these women are often still issued equipment originally designed for males.

While advances in female Army Combat Uniforms are already available, the 101st Airborne Division first suggested changes be made to Improved Outer Tactical Vests for women in 2009. These IOTVs hold a Soldier’s body armor plates. Much of the need for specific changes comes from the fit of the IOTVs on women, who are generally shorter and curvier than their male counterparts.

“They ride up on the female’s hips, and it’s very hard for us to move,” said 1st BCT Spc. Arielle Mailloux.” During PT we’ll have to wear it and then go running, and it gives bruises on our hips.”

As a result of the suggestions of the 101st, officials from the Project Manager Soldier Protective Equipment Office and Natick Soldier Research, Development and Engineering Center came together to design a better-equipped vest for women.

With more women from the 101st Airborne Division scheduled to deploy to Afghanistan later this year, Mailloux expects the redesigned IOTV would help these Soldiers perform their jobs better – especially in the case of Female Engagement Team members like herself.

“We’ll pretty much be going out with the infantry guys,” Mailloux said. “We’ve got to sell ourselves to them, and tell them that we can do the work and that we can keep up. We’ll be talking to the Afghan populace. … You always have to have your feet on the ground.

“The comfort of the IOTV is very important when we’re sitting down, either that or we have to sit crisscross … and it’s really uncomfortable.”

Nineteen Soldiers from 1st BCT’s Female Engagement Teams are testing the female IOTVs, which were issued and fitted by experts earlier this week at Fort Campbell’s Personnel Processing Center.

After being issued the prototype models, these Soldiers will wear the vests at normal training exercises during the next several weeks as part of the Limited User Evaluation. The women will then have the opportunity to respond in survey form, offering their comments, suggestions, problems and feedback to the design team.

“I’m just excited,” said 1st BCT Capt. Lindsey Pawlowski. “I never thought I’d be the first for anything. I wish 3rd Brigade was still here so they could play with it too, but at least some of us get to.”

Pawlowski explained that because she’s short, typically “nothing fits right.” When her Female Engagement Team deploys, comfort is essential to completing their mission.

The fielding continues with the Human Factors Evaluation portion, Sept. 10-21, when the project managers come back to post for more testing opportunities.

“That’s more intense,” said Maj. Joel Dillon, assistant product manager for soft body armor at PM Soldier Protective Equipment. “That’s where we actually put them through obstacles. Then we measure their range of motion. We check with our evaluators to ensure there are no issues with the vests. Then we do more surveys based on that. We’ll make them get in and out of vehicles; we make them walk down little balance beams …”

It’s the everyday activities that will be the true test of how the vest works.

“To be able to shoot your rifle, you need to be able to put it into your shoulder,” Dillon said. “The current vest is a little wider on top, because it’s more designed for a male. It’s harder for a female to shoot her rifle. So we’re looking at all those different things. Also the functionality, if a Soldier doesn’t like where a pull tab is or they don’t like where Velcro is located or whatever, we can move it.”

By the end of September, the project team will compile all the data and feedback from the Fort Campbell fielding. By January, Dillon anticipates the purchase description will be complete so that companies can start the bidding process to manufacture the vests. Once this is settled, as many as 3,000 female IOTVs could be manufactured for use by a brigade-sized unit and be available by summer 2013.

“Everything you do in this evaluation is going to affect every female Soldier in the Army for the next 10 years,” said Christopher King, Natick Equipment Specialist, Operational Forces Interface Group, to the female Soldiers. “There’ll be changes. There are always changes, but it starts here.”

While these vests share many features with the Generation III models already in production, such as an improved quick release system that separates the vest in two pieces while leaving the cable attached, it’s key that these Fort Campbell women give helpful feedback in order to make sure it’s safe and comfortable for Army-wide release.

“It’s important to have body armor that fits, no matter who you are — male or female,” Dillon explained.

In reference to Female Engagement Teams who are often on patrol while deployed with infantry units, Dillon added “it’s very important that their body armor fits them just as well as the male Soldiers standing on their left and right.”

Lynne Hennessey, a clothing designer for the Design, Pattern and Prototype Team at Natick, said 85 percent of female Soldiers do not fit properly into the extra small IOTV currently in widespread use. When designing the female IOTV Generation III prototype, Hennessey’s first concern was improving the fit.

“[Previously] it was more fitting the females like a cage,” she said. “There was nothing curving, nothing bending about it. They would sit down and [the vest] would rise up.”

She added darting to the front of vest, a feature included in most women’s clothing styles. The darts allow the front to be more form-fitting.

Plate sizes also changed on the sides, decreasing to a 6×6 inch or 6×8 inch option, depending on vest size. These are a much better size than the 7×8 inch plates currently issued for the standard IOTVs. The side pockets for the plates can also be moved and adjusted as needed, and the vest now fits closer to the body, especially near the underarms.

The new model balances on the female better as well, Hennessey added, with a medium-sized vest with plates weighing about 23 pounds. Additional improvements include changes to the ballistic collar and the way the front panel is inserted, as well as shortening the torso.

“It’s new,” Pawlowski said of the vest. “The telling is really going to come out in the next couple weeks when we use it for every single bit of training we’ve got.”

All trucks in Orlando Fire Department to be outfitted with ballistic...