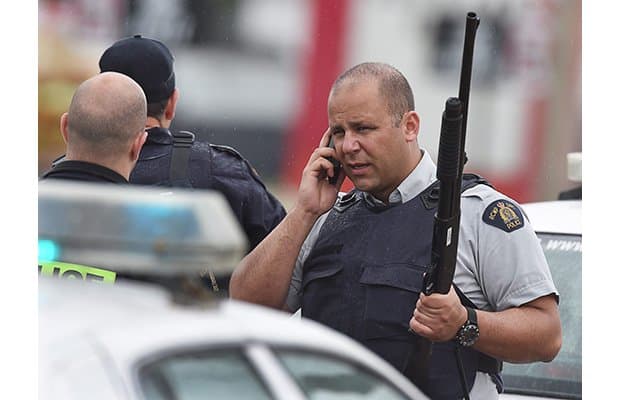 The RCMP rebuffed criticism Wednesday that it has failed to properly equip and train its officers, two weeks after three of its members were fatally gunned down and two others injured in Moncton, N.B.

In a lengthy statement, the force said the investigation into the June 4 shootings is in its early stages and investigators are still trying to determine what happened. The RCMP said it also cannot release sensitive information that might jeopardize court proceedings.

But it dismissed as “personal views” and “speculation” that officers in New Brunswick did not have access to hard body armour or C8 patrol carbines, a type of assault rifle used by military personnel and many police forces.

Hard body armour has been available in Codiac since 2011,

the one-page statement said, referencing the detachment that responded to the Moncton shootings.

“There have also been suggestions regarding the new C8 patrol carbines. While it is true that all officers do not have training on these yet, it is an ongoing process, and the training and rollout of the C8s is continuing, and that includes in Codiac.”

The statement comes after retired and serving members say the force has been slow to equip officers with weapons, like the carbines, to properly defend themselves.

Rob Creasser of the Mounted Police Professional Association said many detachments still don’t have the high-powered rifles or specialized armour that is better able to protect against rifle fire.

Creasser, a retired member of the RCMP who now works with the professional association representing Mounties, said when he heard about the shootings and subsequent manhunt in Moncton it took him back to the deaths of four RCMP officers near Mayerthorpe, Alta., in 2005.

The officers in Alberta were guarding a marijuana grow-op when the owner opened fire on them with a rifle, leaving them to defend themselves with 9-mm handguns.

The shooting deaths led to recommendations seven years ago that police be equipped with proper protective vests and the C8 carbines, something Creasser says has been woefully slow to be acted upon by senior RCMP brass.

“The rollout of these recommendations has been an absolute debacle,” he said in an interview.

“Members have said they’re dragging their feet on this and we’re dying out here. So the fact remains that four members were killed in 2005, there were recommendations made to equip and train people with better body armour and new weaponry, and here we are seven years after those recommendations and very little has changed.”

Creasser said after looking at photos from the night of the Moncton shootings, it appeared RCMP officers were wearing soft protective vests and using 9-mm handguns against a gunman who allegedly was carrying two rifles.

Supt. Troy Lightfoot said he couldn’t discuss any specifics in the Moncton case since it is still under investigation and before the courts.

But he said the force has distributed 1,330 patrol carbines to divisions across the country since 2012 and plans to provide another 219 by September. He said almost 5,000 sets of hard body armour have been dispersed, with one in every police vehicle.

“Within two years we’ve accomplished a considerable amount of work in terms of the distribution of arms,” he said.

“This is a work in progress forever because threats change. All we can do is adapt.”

Justin Bourque, 24, was charged with three counts of first-degree murder and two counts of attempted murder after the shootings in Moncton. He is due back in court next month and has not entered pleas on the charges.

A serving member of the RCMP who did not want his name used for fear of reprisal from the department said he was dismayed to see the gear being used in the Moncton incident, years after upgraded weaponry was recommended.

He conceded that it’s not clear the hard body armour or carbines could have changed the outcome in Moncton.

“The thing that irks me the most is that yes, it may not have saved the three but to see members out there with equipment that rivals the 1950s type of technology and exposed to continued threat and harm is not acceptable,” he said.

You’ve purchased 5,000 sets of hard armour, but when you’ve got 18,000 people on the frontline, I don’t think that number is particularly astounding.