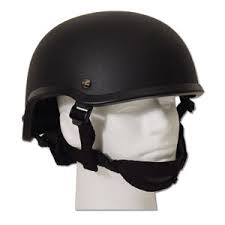 Many agencies have purchased military Personal Armor System Ground Troops (PASGT) helmets in an attempt to provide their officers with better protection. Although there is currently a proliferation of surplus PASGT helmets at a comparatively low cost, the PASGT helmet is clearly not the best choice for either tactical units or as a general-issue ballistic helmet.

The military-issue PASGT helmet—or “K-Pot” (“K” for Kevlar®) helmet, as it’s commonly referred to by troops—was designed primarily to provide protection against fragmentation from grenade and mine explosions. While it does provide inconsistent ballistic protection that’s roughly equivalent to the NIJ Level IIA standards, the PASGT, is overly heavy for the level of protection that it provides, is uncomfortable to wear in the prone position, and reduces peripheral vision.

There are other negatives as well. The PASGT helmet uses a bolted-on nylon suspension with a leather headband that is fastened onto the inside headband. While the PASGT’s harness system was an improvement over the helmet harness system on the old military M1 steel pot helmet (used by our military from WWII until the issuance of the PASGT in the early ’80s), it still leaves much to be desired.

PASGT to ACH
The U.S. Army has transitioned from the PASGT to the Advanced Combat Helmet (ACH), the Army’s next generation protective combat helmet. Army-wide fielding of the ACH began in June 2006.

The ACH is based on the MICH TC-2000. The Modular Integrated Communications Helmet (MICH) began development in 1997 at the U.S. Army Soldier Systems Center at Natick, MA as part of the Special Operations Forces Personal Equipment Advanced Requirements program at the U.S. Special Operations Command (USSOCOM). Three versions of the MICH were developed—the MICH TC-2000, MICH TC-2001 and MICH TC-2003. The MICH helmet was named one of the 10 Best Inventions of 2002 by the U.S. Army Material Command.

Although the Marine Corps tested the MICH, it ended up opting for what is essentially an improved version of the PASGT—the Lightweight Helmet (LWH). The LWH provides increased ballistic protection and features an improved suspension. The ACH utilizes a later generation of Kevlar than the PASGT. It provides increased protection from handgun rounds, while being lighter in weight than the PASGT. This, combined with different bonding techniques, forms a shell capable of halting a 9mm round fired from a SMG, in addition to protecting against fragmentation. Depending on the helmet size, the ACH ranges in weight from 3 to 3.6 pounds.

The ACH is slightly smaller than the PASGT. It’s cut higher, and the edge is trimmed away for improved visibility, unobstructed hearing and reduced weight when compared to the PASGT helmet. This allows for greater situational awareness and less obstruction of the wearer’s vision when employed with the Army’s Interceptor® body armor.

A common complaint with the PASGT was that the high collar of the Interceptor pushed the back of the helmet forward. This resulted in the brim of the helmet being moved over the eyes, obstructing vision, when firing from a prone position. The ACH can be used with all types of body armor without it feeling clumsy or it bumping into the armor. It also provides greater compatibility with communication systems, one of the reasons that the MICH was originally developed.

Coverage is reduced by 8%, compared to the PASGT. Marine Corps officials opted for the increased coverage of the LWH over the ACH, feeling it was better suited their operational needs. The Army felt that the advantages of the lower profile helmet outweighed the reduced coverage, especially in today’s MOUT environment.

The Army was not the first to see the advantages of a lower profile helmet. Lower profile helmets, such as the RBR Combat MKII Level IIIA helmet, have been popular with special operations forces (SOF) operators and tactical teams for a number of years.

Suspension
The nylon cord suspension system, sweatband and chin-strap found on the PASGT helmet has been replaced on the ACH with an innovative seven-pad system and four-point retention system. The MICH / ACH pad system is similar to the cushions and straps that are found on bicycle helmets. The pad system is designed to provide better impact protection, stability and comfort for the wearer.

The ACH suspension pads are composed partly of comfort foam where the pads touch the head. They are mostly composed of “slow-memory” impact foam. The impact foam is designed to act like a shock absorber. The pad system has proven its worth in Iraq, providing troops with potentially lifesaving blunt impact protection from the blast force of IEDs.

The ACH has a black CoolMax® cloth covering that wicks moisture. This helps the user stay cooler. The lining inside the ACH consists of a glued-on strip of Velcro® fastener. This allows users to unhook and adjust the pads to create a custom fit. The ACH has an improved strap that attaches at four points on the helmet while retaining the chin pocket. This provides a more secure fit. The two-point chin-strap on the PASGT has been replaced with a four-point chin-strap.

The two-strap “pocket” at the chin remains the same as on the PASGT. However, instead of anchoring to the helmet over the ear, the ACH utilizes one strap in front and one strap behind the ear on each side for better stability and security. The ACH can be fitted with a mounting bracket for an AN/PVS-14 monocular night vision device (MNVD) on the front, similar to that on the PASGT helmet. The ACH can also be fitted with a pair of straps on the rear of the helmet to keep protective eye wear.

Helmet Testing
Misconceptions exist regarding helmet testing. One common misconception is that of NIJ-certified Level IIIA helmets. The NIJ does not certify Level IIIA helmets. The only comprehensive Level IIIA testing protocol for helmets in the U.S. is the H. P. White Helmet Test Procedure (HPW-TP-0401.01B). The NIJ certification for helmets (NIJ Standard 0106.01) only provides for testing up to Level II. Additionally, it does not measure backface deformation. That said, testing protocols of NIJ Standard 0106.01 are employed by many manufacturers for testing helmets up to Level IIIA.

Level IIIA testing to NIJ Standard 0108.01 for ballistic material is only for testing flat armor panels. NIJ Standard 0108.01 for ballistic material specifically excludes helmets from being tested to this standard. The H. P. White Helmet Test Procedure is considered to be the most comprehensive helmet test standard currently available. In the H. P. White Procedure, helmets are tested versus penetration and backface deformation of Level IIIA 9mm and .44 Magnum ammunition. The test additionally requires that one of each of the above rounds must impact directly on a suspension system fastener resulting in zero penetration.

Ask to see test results. Manufacturers should be able to provide them. Ballistic helmets that don’t meet the requirements of the H. P. White Helmet Test Procedure should be considered substandard. A number of manufacturer’s now offer versions of the MICH / ACH. Many of these are identical to the MICH / ACH. Others are variations on the design, incorporating some MICH / ACH features and adding others. The following is a description of MICH-style ballistic helmets from top armor manufacturers.

Cop Shot Three Times But Is Saved By Bulletproof Vest