The bombing in Boston, where responders can be seen running toward the explosions, and the December attacks in Western NY where a man started a fire and shot and killed the responding firefighters, underscore the danger that emergency responders could encounter on any given day.

“The only difference is EMS providers are the ones who don’t have safety equipment. A polo shirt and a pair of Dickies is not safety equipment,” said Tim Thomas, a paramedic and assistant chief of the Community Emergency Corps.

Now, that’s changing. When the call comes in for medical help, the paramedics of the Community Emergency Corps will be wearing more than pants and a polo shirt.

“To us, it’s another level of safety we can give to our responders. It’s something not all agencies will want to use,” said Ray Otten, executive director of Community Emergency Corps. “But we feel that if we have it available and the need is there, better to be prepared than not.”

The corps serves 24-thousand people in Saratoga County. They paid for some of their new gear with a donation from the surviving spouse of a former member. Her name is on the inside of the body armor, which costs about 400-dollars apiece.

They bought sixteen of the jackets from a company in Gainesville, Florida, whose owner donated some of the costs.

“We wanted to make sure that, heaven forbid, if a person took rounds, they could keep doing their job and get out of Dodge,” said James Coats of Phalanx Defense Systems.

Community Emergency Corps says they were looking for state or federal grants to defray the cost of the body armor, but they couldn’t find any. They say that money is reserved to protect police officers. 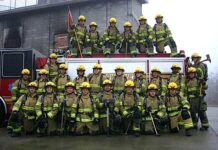 Gwinnett Firefighters To Be Furnished With Body Armor

Gwinnett Firefighters To Be Furnished With Body Armor