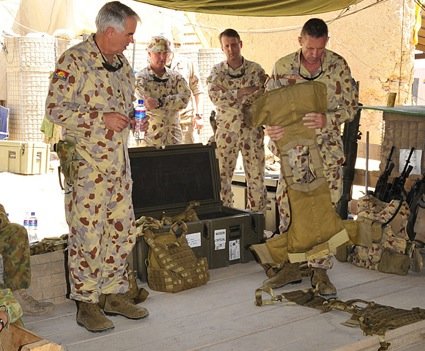 AUSTRALIAN Defence Apparel will employ an extra 50 people in Bendigo to make the new Tiered Body Armour System for the Australian Army.

Federal Defence Materiel Minister Jason Clare visited ADA on Wednesday to inspect the first of the protective uniforms, which will be worn by the next deployment of soldiers to Afghanistan mid-year.

The federal government has ordered 1600 sets of the new combat body armour, at a cost of $4.7 million, and 3400 pouches.

“The soldiers in Afghanistan told us ‘it’s too heavy for what we are doing’ so we made an urgent order to the United States to buy a lighter body armour, called Eagle Marine. We got 1000 of those and our soldiers have got them right now in Afghanistan,’’ he said.

“We wanted to produce an Australian-made and Australian-owned body armour so we could make changes when needed.

“It’s creating jobs here in Bendigo and it’s going to save lives of soldiers in Afghanistan.’’

“It also has the advantage that you can put a different ballistic plate in the body armour depending on the type of mission you need to do,’’ he said.

“The feedback from the troops that have tried this has been fantastic. Special forces have trialed it, as well as troops from the regular units, they’ve told us it’s lighter, a better fit and gives them the agility to move around.’’

Mr Clare said there could be an opportunity to sell the armour to other countries in the future.

The federal government announced in April 2008 that ADA had won a five-year tender worth $80 million.