Home Body Armor Materials Is Your Body Armour Vest Junk — Or a Jewel? 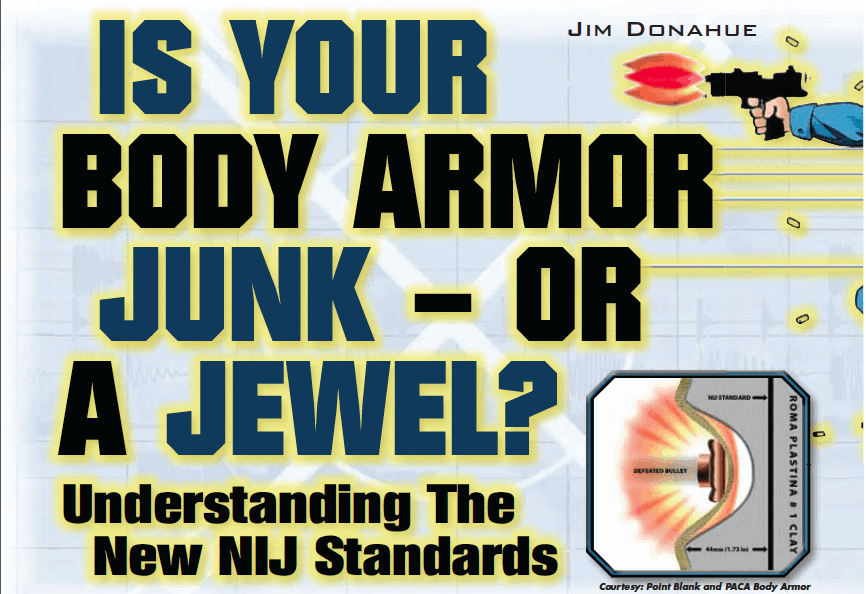 Is Your Armour Junk — Or a Jewel?

Should you throw your body armour vest in the trash or thank the guy in the department who selected it? Chances are, neither action is appropriate, though a few department decision-makers may deserve to be given a serious dose of whoop-ass. As a technology buff, I often write about computers, cameras and the like. When I was asked to research and write this article, it threw mea curve. My editor reassured me a body armour vest involves more technology than anything else a cop uses. I’ve learned that is the understatement of the decade —somuch for my “computer-only” stance.

Rarely has so much information been put forward by so many, resulting in total confusion of the masses. Geek-speak, techno-jargon, turf-wars, slick-tongued sales people and a myriad of others have all peed in the soup, making the result mostly useless. Howdid you, the user/wearer of body armor end up with the particular body armor vest you were issued? Did the vest-fairy visit you? Did you just hut-hut right down to Supply and pick up your required gear without a care or thought about it? Probably.

The Body Armour Vest; Some Basics

The reality is most cops are wearing a body armour vest selected by someone in their own agency who probably didn’t have a clue about the nuances of vest design or standards and was trying to work within a very limited budget. That’s not to say inexpensive vests are crap, in fact a cheaper vest may be better than a zoot-deluxe expensive one. It’s just a matter of fact. Sorry. Remember, it’s only your life you’re entrusting to the administration to make the best and safest choice for body armor. “Exactly what do you have?” is a legitimate question and one you should be able to answer. Every vest has a label on the inside and it must show two pieces of data; the threat level and expiration date. The expiration date is nothing more than the manufacturer’s warranty and is typically about five years. Don’t interpret this to mean you should toss yours simply because it’s out of warranty, and it doesn’t mean it’ll no longer be able to stop a feather — should someone shoot you with one. Wearing a body armour vest, even one beyond the expiration date, is better than not wearing one at all.

Body armor deteriorates over time. How quickly it deteriorates and to what degree depends on how often it’s worn, the conditions (such as extreme heat andperspiration) under which it’s worn, and how the owner cares for the vest. Read more.