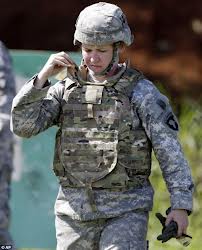 Concerned that U.S. troops are already saddled with too much heavy gear, military officials will not require them to wear improved body armor until manufacturers cut the weight of the new protective plates.

The Army plans to buy 120,000 sets of the advanced bullet-blocking plates this year. This initial purchase of the hard armor plates, known as “XSAPI,” will be stocked in Kuwait and be available if commanders need them, service officials said at a congressional hearing Wednesday.

The quality of small numbers of the current plates, called “ESAPI,” was questioned last week in an audit by the Defense Department inspector general’s office. The audit said the ESAPI plates from one body armor manufacturer – Armor Works of Chandler, Ariz. – were tested improperly and may not provide troops adequate protection.

The Army disputed the conclusion. ESAPI is the best body armor available and a lifesaver in Iraq and Afghanistan, service officials insisted. Nonetheless, as a precautionary step the Army decided to withdraw nearly 33,000 Armor Works plates in question from an ESAPI inventory of about 2 million produced by nearly a dozen different companies.

The body armor used by most American forces consists of a vest with a series of inserts that protect most of the upper body from armor-piercing rounds. The specially hardened ceramic plates are the largest of the inserts; one is placed in the front of the vest and another in the back.

But making the roughly 6-pound XSAPI any lighter is harder than it sounds. The plate has to be thick enough to defeat new and more potent bullets finding their way onto the battlefield, says Joel Moskowitz of Ceradyne in Costa Mesa, Calif., one of the companies making XSAPI.

“A certain amount of thickness is required,” Moskowitz said Wednesday in an interview. “You just need that to stop that first hit.”

The Army’s testing methods were backed by the Pentagon’s director of operational testing, an independent office that assesses how gear performs.

But in an action separate from the ESAPI armor recall, the Army in December voluntarily withdrew just over 8,000 plates because of testing gaps. Those hard armor plates were made by Armor Works and other manufacturers, including Ceradyne.

Contracts potentially worth $6 billion for XSAPI and ESAPI plates were awarded in October 2008 to Ceradyne, BAE Systems of Phoenix, and The Protective Group of Miami Lakes, Fla. The work was put on hold after BAE filed a protest over the manufacturing schedule.

Overall, the military could acquire up to 1 million sets of XSAPI plates.

ESAPI plates range in size from extra small to extra large and weigh on average 5 1/2 pounds each. XSAPI plates come in the same sizes and weigh about half a pound more.

An extra pound may not seem overly burdensome. But when added to the combat loads the troops already carry – backpack, combat rifle, ammunition, helmet – it creates more strain, particularly in harsh environments like Afghanistan, the Army says. The elevation and rugged terrain there means troops must often track insurgents on foot and every pound counts.

“Over time, the body armor, it does wear on your body,” said Army Staff Sgt. Fred Rowe, who has done two combat tours in Iraq. “I couldn’t imagine doing what I did, carrying what I carried, in Afghanistan.”

Rowe appeared at the hearing along with several senior Army officers, including Maj. Gen. Robert Lennox, who oversees operations and training.

Brig. Gen. Michael Brogan, head of the Marine Corps Systems Command in Quantico, Va., agreed with Army leaders who said that the vast majority of requests from commanders in the field, especially those in Afghanistan, ask that the troops’ load be lightened.

“We must balance levels of protection in order to maintain the agility, mobility and lethality of our Marines,” according to Brogan’s written testimony.

Only 59 Percent Of Agencies Require Officers To Wear Body Armor,...