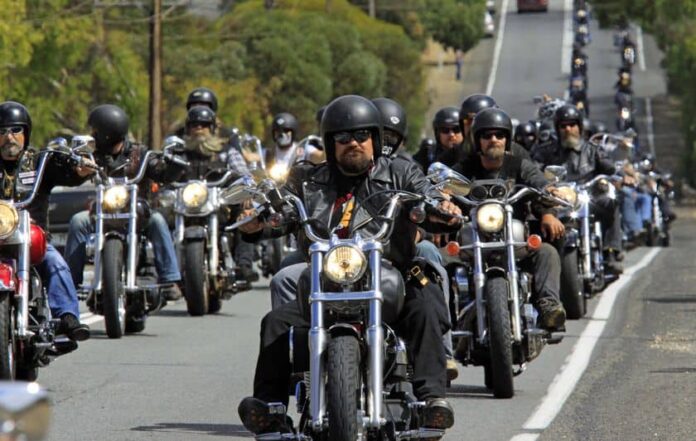 The police union has called on the commissioner to urgently approve Victorian-style protective body armour for officers in the wake of new threats from an outlaw motorcycle gang.

The Queensland Police Union first requested body armour from Police Commissioner Ian Stewart two weeks ago, but received no reply. Queensland Police Union president Ian Leavers said he had written to the commissioner again on Friday morning, seeking an answer by the close of business.The Victorian-style body armor would protect officers from rounds shot from all weapons, except high-powered weapons, according to the union.

However, an internal notice sent to Queensland police officers this week warns the Mongols are stockpiling automatic weapons including M16 and AK47 guns.

A member of the Black Uhlans CMG [criminal motorcycle gang] was previously confirmed to have sought to obtain automatic firearms (M16 and AK47) on behalf of the Mongols and Finks CMG,

The “Officer Safety Bolo” [Be on the Lookout] also warns that the Mongols have said they would rather kill officers than be arrested and face the government’s new laws.

Under the new laws, an office-bearer of an outlaw motorcycle gang caught in possession of marijuana would receive a mandatory 25 years jail on top of any sentence, Mr Leavers said.

“That puts police at a significant risk and that is why I have asked for them to be armed appropriately,” he said.
Mr Leavers said Police Minister Jack Dempsey had already backed the call for protective body armour.
“I know the Minister has said that if he gets a request from the commissioner, he will grant it,” Mr Leavers said.
“I am asking the Commissioner to make a decision that will protect Queensland police today, because I would hate a tragedy to occur which could have been prevented.

“Victorian police have got it, Queensland police should have it.”
Fairfax Media understands it would cost about $5 million to purchase the body armour.
Mr Leavers said the armour, weighing about a kilogram, was ballistics and knife resilient.
“It would stop a round. If a police officer was shot, it would very well stop a round,” he said.
“It will not stop a round from a high-powered weapon, I know that, but it will give a very general protection.”
Mr Leavers said threats to police officers, like those made by the Mongols outlaw motorcycle club, were very real.
Comment is being sought from the police commissioner’s office.
Mr Leavers said senior police were refreshing their weapon’s handling skills, on the instructions of commissioner Ian Stewart.
“And as at [Thursday], the commissioner has requalified in the use of his Glock,” he said.
“The commissioner has re-trained so obviously there is a risk out there.”