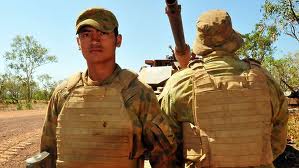 Australian soldiers in Afghanistan will soon be equipped with new body armour, replacing a type criticised by many Diggers as dangerously heavy and bulky.

The Tiered Body Armour System, which began rolling off the production line in Bendigo yesterday, is less than half the weight – five kilograms, compared to 11 kilos – and more flexible than its predecessor.

Diggers told the Herald last month the existing Modular Combat Body Armour System was so heavy and unwieldy it made them ”almost combat-ineffective”. In particular, they said the armour made it difficult to stabilise a rifle butt on the shoulder, affecting their aim. It was also too heavy for the foot patrols the soldiers in Afghanistan mostly conduct.

The Herald also reported allegations last year the Australian Defence Force systematically covered up and discouraged soldiers’ complaints about equipment, including the Modular Combat Body Armour System. As a result, the government launched an investigation into the complaints system, announcing late last year that it would be substantially changed.

As it became clear the Australian soldiers in Afghanistan were unhappy with the armour, which was designed to protect vehicle-borne soldiers in Iraq, Defence hurriedly bought 2000 sets of lighter armour from a US company called Eagle Industries as a stop-gap until the new Australian armour went into production.

The Minister for Defence Materiel, Jason Clare, said the armour, produced in conjunction with Australian Defence Apparel, had been extensively tested by regular and special forces soldiers over the past 18 months. “They told us this was the body armour they want to wear in Afghanistan,” he said.

“They said it integrates better with their combat equipment and provides much greater freedom of movement, especially around their shoulders. This enables soldiers to get into better firing positions and manoeuvre more freely on the battlefield. Because it is Australian-made and we own the design we can also make adjustments and improvements at any time to suit the needs of our troops.”

It may be months before the armour arrives in Afghanistan.