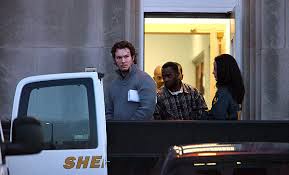 Two former defense contractors were fueled by alcohol and rage the night they killed two Afghan nationals and injured another on the streets of Kabul, prosecutors claimed during opening statements of the their trial on Wednesday.

Their attorneys countered that Justin H. Cannon, 28, and Christopher Drotleff, 30, believed they were under attack on a dark, dangerous highway when they opened fire the night of May 5, 2009.

Cannon, of Corpus Christi, Texas, and Drotleff, of Virginia Beach, face murder, assault and weapons charges that could send them to prison for life. Their trial began Wednesday in U.S. District Court and is expected to last two to three weeks.

The men were in Afghanistan to provide weapons training to the Afghan National Army as contractors with Paravant, a subsidiary of Blackwater Worldwide. North Carolina-based Blackwater, now known as Xe Services, has settled numerous federal lawsuits alleging that illegal activity by the company led to the deaths of dozens of Iraqis.

Prosecutors said the pair were “a disaster waiting to happen” that day, drinking for several hours after two of their superiors were fired before disobeying a direct order and heading out to drive two Afghan interpreters and another man to a taxi stand. They were on a road known for attacks on Americans.

Both sides agree that the men left their camp to drive two Afghan interpreters and another man to a taxi stand late that night, that the second SUV in their convoy wrecked, and that the men shot at a small, gray Toyota that sped from the crash scene.

Prosecutors said the SUV wrecked because it was driving too fast on the unlit four-lane road, that the driver swerved to miss a vehicle and turned onto its side. Defense attorneys said Cannon and Drotleff believed that a car that had gotten between them and the lead SUV bumped it, causing it to wreck on purpose.