In an emotional ceremony Wednesday on the floor of the SHOT Show in Las Vegas, Safariland honored the latest member of the company’s Saves Club.

Agent Nate Castro of the California Department of Corrections (CDC) was shot twice in the chest with a .40 caliber handgun during a Nov. 5 operation to apprehend a dangerous fugitive in Fresno. Castro’s Level IIIA Safariland body armor stopped the rounds, which would have been likely fatal, and he suffered no injuries other than significant bruising. Castro was one of 45 saves attributed to Safariland armor or duty gear during 2013.

Castro choked up as he was asked to tell the story of what happened to him nine weeks ago. “I can still smell the smoke,” he said.

For 16 months the unit had been pursuing a man who was wanted for false imprisonment, kidnapping, rape, and torture. On Nov. 5, they received a tip that the fugitive was holed up in a Fresno apartment. The team was called out and sent to the address. Castro said when he was called out that afternoon he figured he would just get some overtime that would help him pay some bills and then be home to his wife and three kids soon. Most fugitives surrender and comply with the team, he explained.

This fugitive, Jerry Vue, 27, had other plans.

Castro and the team arrived at the duplex-style apartment and questioned a resident who said Vue was not inside. Then the team made entry to search for Vue.

At first the search and clearance of the dwelling proceeded without incident. Then Castro started to clear the garage. He opened the door leading from the house to the garage, started to step inside, and was met with a fusillade of shots.

Hit twice, Castro went down. A sharp firefight ensued between the other members of the team and Vue. Vue was killed. Castro and two other officers suffered minor injuries. “Our guys in the task force had a good day, but it was a bad day for the bad guy,” Castro said.

Castro is the 1,876 member of the Safariland Saves Club. During the ceremony he lauded praise upon all the people who designed and manufactured his vest. “If it wasn’t for the people who made my vest, I wouldn’t be here,” he said.—David Griffith 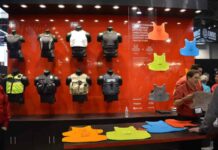