One man is in jail, accused of firing gunshots at Hickory police during a late-night raid. Police said two children were inside the home during the shootout, and one officer was hit.

James could hear the gunfire coming from her neighbor’s home down the street. There is shattered glass and a spot where several shots tore into the home’s siding during the shootout, which lasted nearly 20 minutes. By Tuesday afternoon, police had placed dozens of cards in the driveway marking shell casings and other pieces of evidence.“

It scared us and we went out the door, and the cop came to the door and told us to shut the door, shut the blinds, stay away from the windows and stay in the house,” James said.

One officer was hit in the chest but wasn’t hurt because of his body armor. Police said as many as five officers returned fire, striking Michael Lee Watson, who was rushed to the hospital and later released and charged with possession of a firearm by a felon.

But police believe Kenneth Hewitt, who also lived at the home, was the one who fired at the officers. He is charged with four counts of assault with a deadly weapon on a government official. Neighbors said they weren’t surprised by the police raid. “I’m not. There is traffic in here all the time, in and out of here different hours of the night — 1, 2, 3, 4 o’clock,” said neighbor Amanda Titus.

Tuesday afternoon, police sources told Channel 9 there were as many as three surveillance cameras at the home, including one we spotted near the side door, that ran video to a television inside. Police have recovered a tape and are checking to see of it shows a portion of the shooting. Mike Little’s daughter and grandson live across the street. “It really didn’t surprise us,” Little said. “We actually wondered why it took so long.” 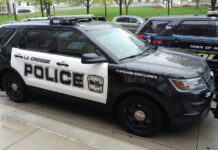 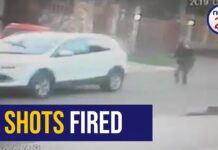